Home » S’more Cupcakes
This post may contain affiliate links which won’t change your price but will share some commission.
JUMP TO RECIPE PRINT RECIPE

S’more cupcakes are a different take on the traditional S’more. Great for a camping themed party or a fun snack for kids! 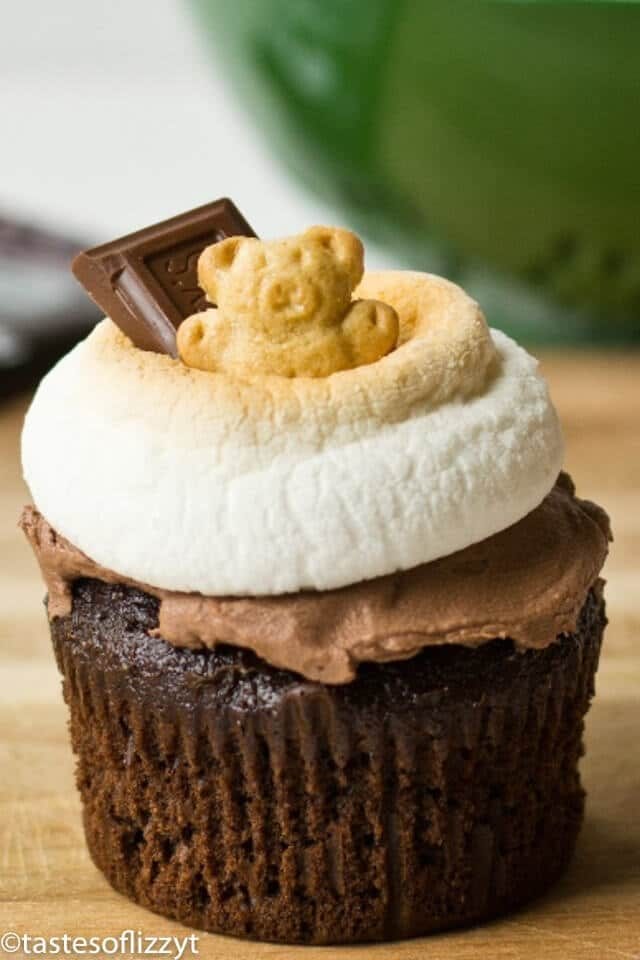 It’s Friday, which brings us to our last Teddy Graham recipe of the week. Sad!
Maddie and I had so much fun creating these together. We have several more ideas using these cute, tasty little bears that you may see over the next few months, too!

About the only time I eat graham crackers is when I have s’mores. I don’t really care for graham crackers that much. They’re just not that exciting. But for some reason, when you put them in a cute bear shape, my love for that graham flavor grows and I could definitely eat a whole box of Teddy Grahams in one sitting. Especially if they are the cinnamon kind!

We had to make one more recipe based on S’mores, and decided on these cute S’more Cupcakes. 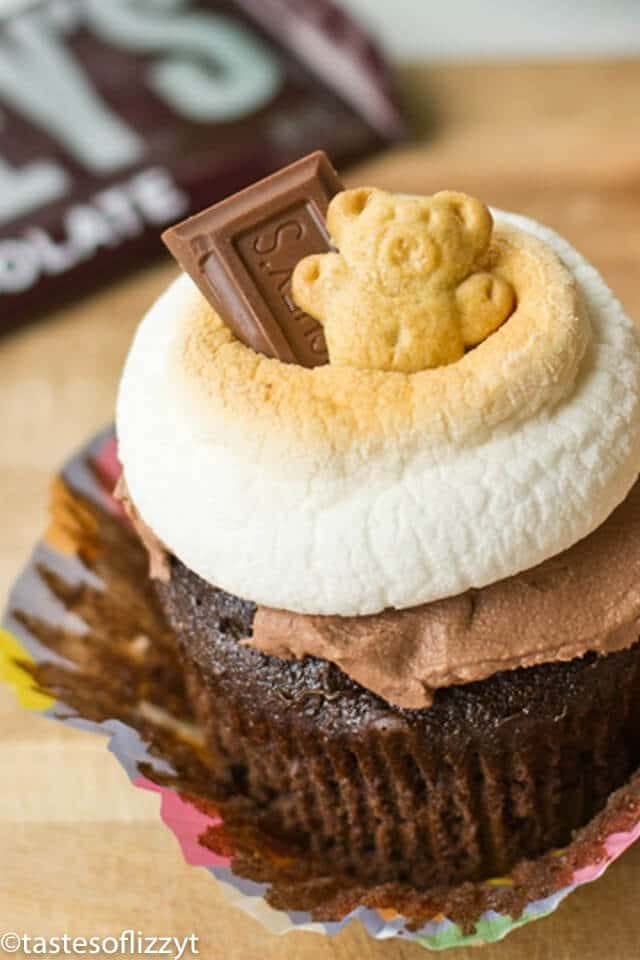 I am a lover of cake, frosting, and all things s’mores, so these cupcakes are just about perfect.

And look at how cute those little bears. They look pretty happy swimming in all that toasted marshmallow.  Can’t blame them, really. Especially with the piece of Hershey’s chocolate next to them!

You’ll also need marshmallows, Teddy Grahams, and a Hershey’s bar or two, depending on how many of these little delicacies you are planning to make.

Frost the cupcakes and set them aside. 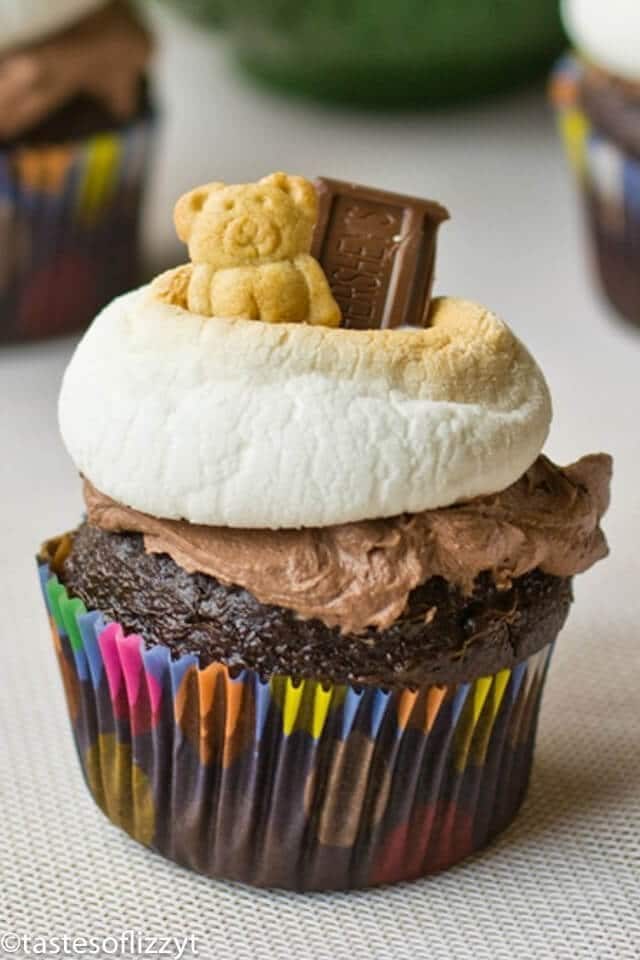 To toast the marshmallows, place them on a baking sheet and bake them for about 5 minutes  in a 350 degree oven. Watch them closely.  You want them to just barely get brown.  If you need to, put the oven on broil for just about a  minute to get them as brown as you’d like.

Remove the pan from the oven and put the marshmallows on top of your cupcakes.  Press a Teddy Graham and a rectangle of Hershey’s chocolate into the top.

Watch the smile on the little bear’s face as he sits in the gooey marshmallow, and then see the smiles on your children’s faces when you serve these! 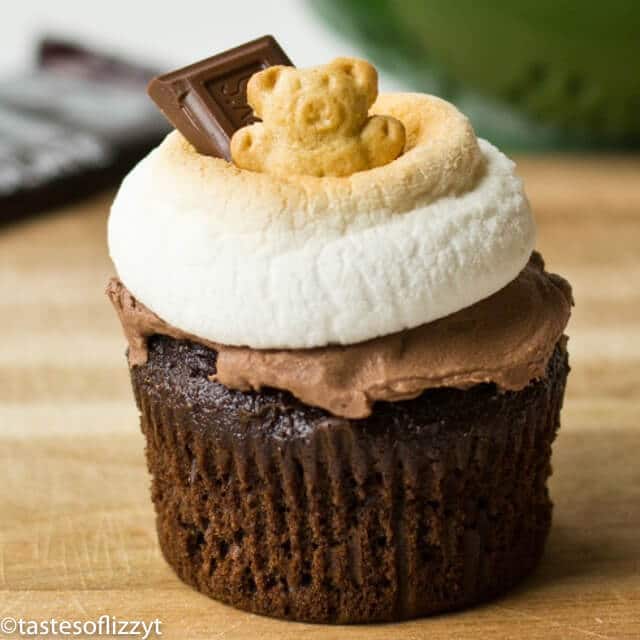 You are really outdoing yourself!!!
These little Teddy Graham recipes are ALL darling!!!

Yum.. I totally get these cupcakes at our local cupcake shop! Now I can make them at home! 🙂 Thanks!

I bet these are so good and your marshmallows look PERFECT on top!

I love it! They look amazing and so simple!!!
We would love it if you’d come over and link up at Random Recipe Link Up

Have a wonderful day 🙂
Sara Howe

These are adorable – my kiddo would love these! 🙂

Oh yum, and the teddys are just too cute 🙂

My 3 year old daughter, Charlie, helped me make the S’more Cupcake as a home coming gift for her big sister… They turned out perfect! We added a little crushed graham cracker, coated with butter, to the bottom of the liner before adding the cupcake batter. Thanks for the recipe! Yummy & super cute!

Those are beautiful and look delicious! I would like to invite you to link up at my weekly Tuesday linky party : http://bit.ly/10Y4jx3
Hope to see you there!

What a great cupcake! And perfect for summer 🙂 Thanks so much for linking up to All My Bloggy Friends this week!

These look so good, Julie! Thanks so much for sharing at Marvelous Mondays. Pinning and sharing this recipe as well. I love all of your baked goodies! 🙂

I just wanted to let you know that this is my host favorite for last week’s Random Recipe Roundup and it will be featured on this week’s post, tomorrow morning! 🙂

These are so cute! I’m visiting from All My Bloggy Friends. I actually posted a s’more recipe too 🙂 Thanks for sharing!

Thanks for linking up last week to Sugar & Slice Sunday. You’ve been featured on tonights link party – hurrah!

I can’t tell you just how much I love these cupcakes and your photography too. They’re simply beautiful not to mention delicious too.

I do hope you’ll stop by and link up to this weeks party again.

Julie, we are so excited to tell you that your yummy S’mores cupcakes are a FEATURED Link from our last party. Come by and see the feature, grab a button and link up your next wonderful creation. Party opens at midnight MST.
BeBetsy BRAG ABOUT IT Link and Hop
Congrats! You deserve it. Hugs ~ Sharon and Denise

Hi there, these are all just too cute. I’m curious what size of marshmallow you used to place on top if the chocolate cupcake?

These are cute,and easy! I had fun making them!

Hi! How did you get the roasted marshmallows off the pan? I put them in the oven for 5 minutes but they stick to the pan and I can’t get them off without it being a mess.

Can these be made ahead of time or does the marshmallow get weird?