Home » Brownie Pie Bars
This post may contain affiliate links which won’t change your price but will share some commission.
JUMP TO RECIPE PRINT RECIPE 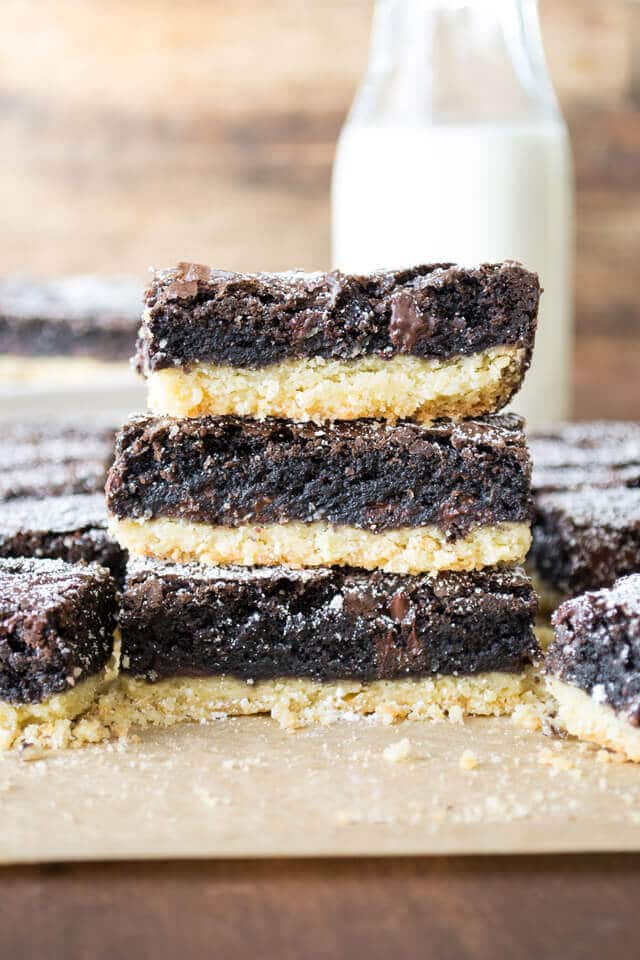 I am always thinking about food, and keep a (very long) list of recipes ideas and inspiration.  I finally joined the 21st century and moved the list to my phone, so at least I can’t lose it anymore 🙂   Some are just ideas, and some are things I’ve actually made before but just never took the time to photograph and share the recipe.  These brownie pie bars fall into the latter category.  I’ve made them countless times to bring to a party or gathering somewhere.  They are always such a hit, and easy to make ahead.  Add a dusting of powdered sugar, and they are so pretty too. 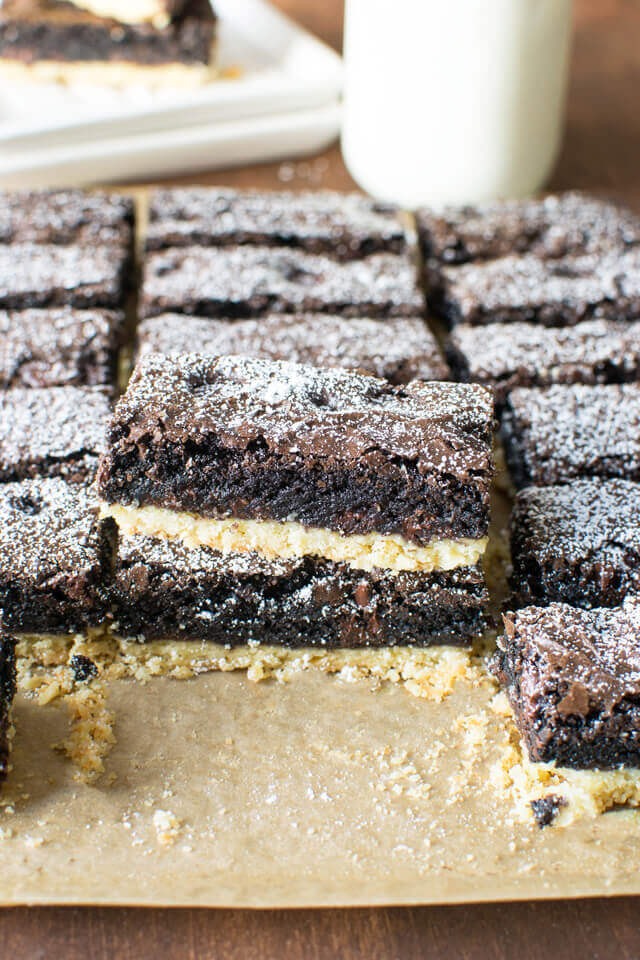 This is a pie crust bottom, but you don’t have to worry about rolling it out.  The crust is called a shortcrust pastry, and it is pressed into the bottom of the pan (like a graham cracker crust).   It is the type of dough commonly used in tarts.  It is rich and buttery, rather than the traditional flaky pie crust.   It gives a nice crisp base, which is a perfect contrast for the soft brownie. 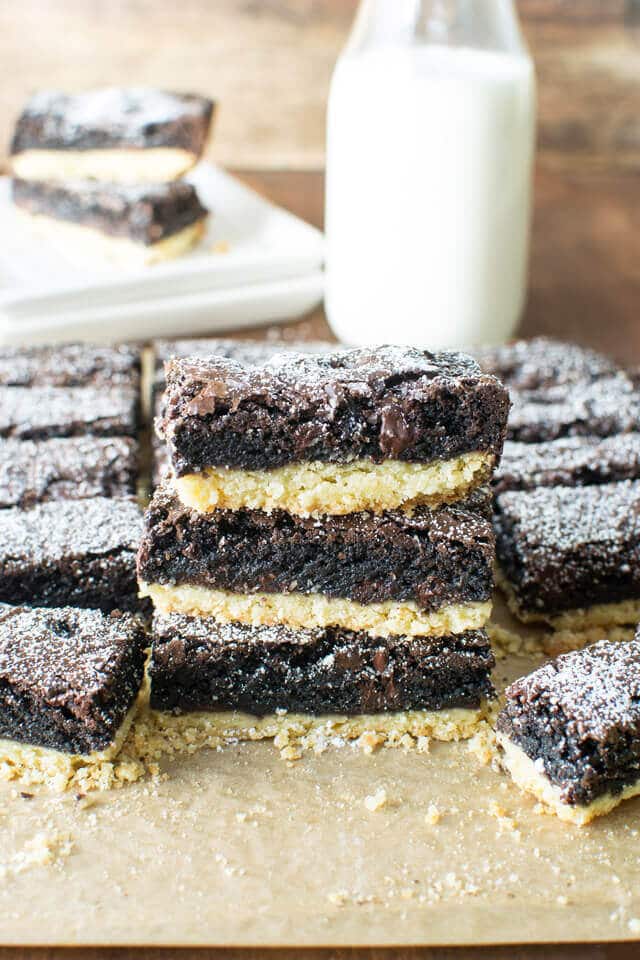 The topping is a classic; deep, dark and fudgy brownies.  Whip up the brownie batter while the crust bakes.  Did I mention they are double chocolate brownies?  Made with cocoa powder and chocolate chips, the brownies are so deliciously chocolatey!  I like to use cocoa powder, because I find that it makes a fudgier brownie, however the chocolate chips give it that crackly crust that looks so appealing.  Using both is a technique I use in all my brownie recipes like my peanut butter brownie layer cake, and my giant (football) brownie. 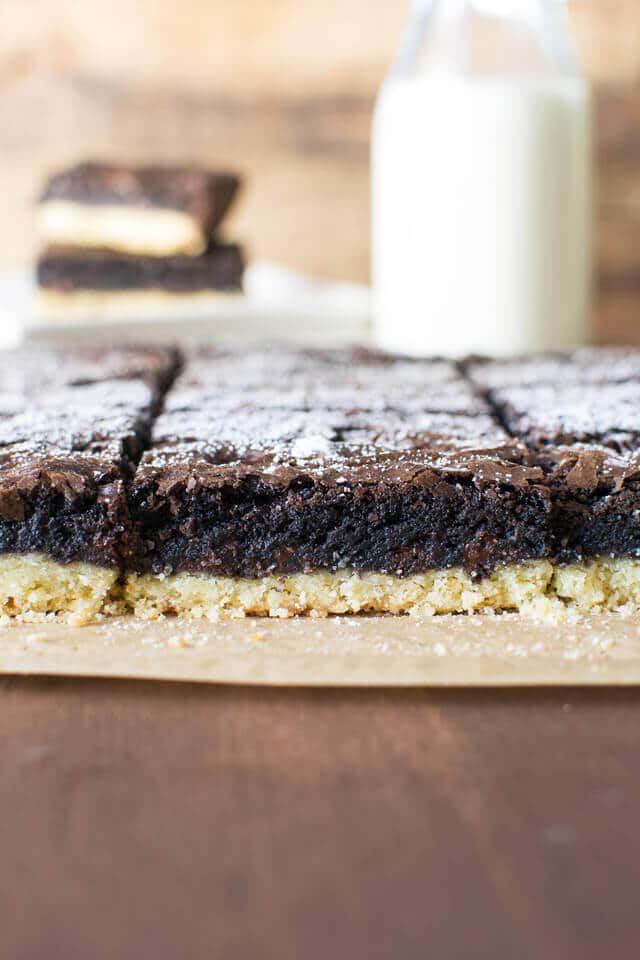 The brownie pie bars are made in a 9×9 baking pan.  I like to cut them into rectangles, and it makes about 18 small bars.  I recommend using a large, sharp kitchen knife to cut straight through the brownie and crust.  The bars will keep for 3-4 days at room temperature, tightly covered. 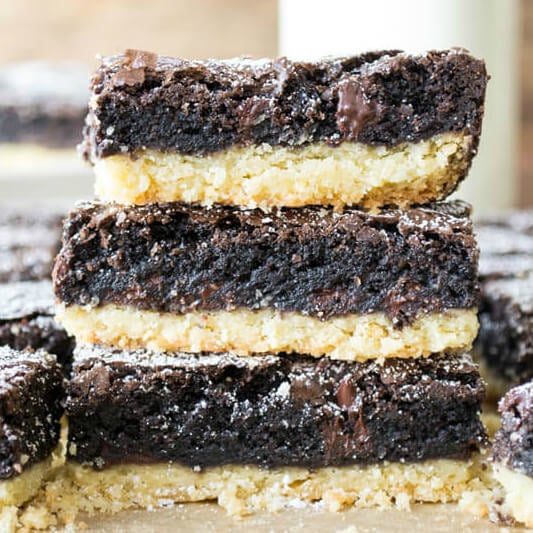 For the Brownie Filling: