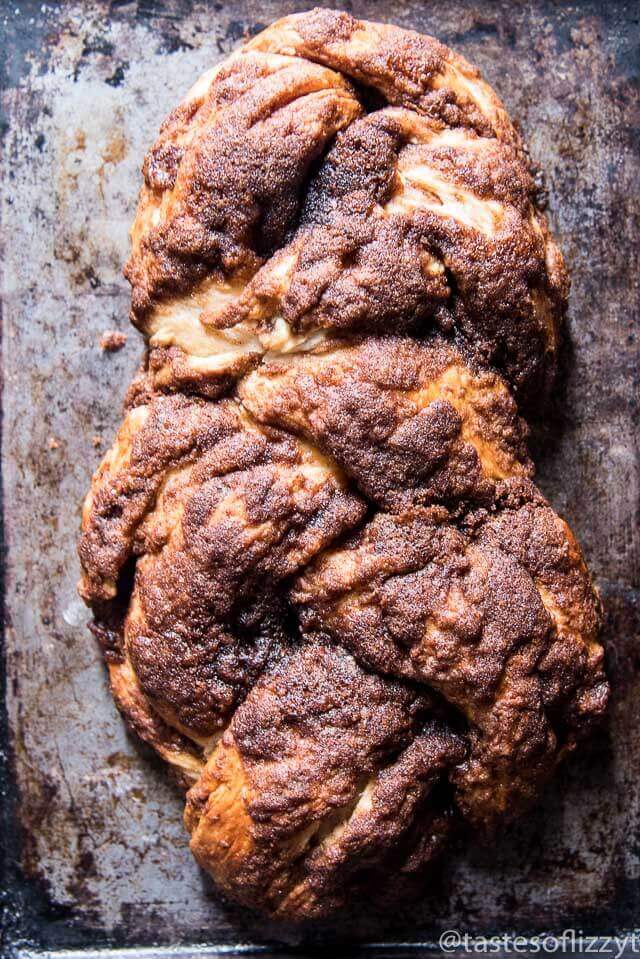 Panera has nothing on this bread recipe! Soft, homemade bread makes up the base of this cinnamon crunch braided bread. Homemade cinnamon chips fill the inside and it’s topped with a cinnamon crunch streusel.

I was reading an old post recently that was talking about how excited we were for the winter weather. I kept thinking, why in the world was I so excited about the cold? You can’t go outside without bundling up, sometimes it’s too cold to even open your garage door, and then sometimes it’s so cold your front door is frozen shut. This has all happened to me this past winter season. But now it’s summer. Summer means warmth, no school, warmth, running, warmth, picnics, warmth, my birthday, and warmth.  Doesn’t it sound great?! I know it does.

Even though summer is upon us, that doesn’t mean you can’t bake homemade bread. Rain, snow or shine, biting into this braided bread makes me want to run around, whatever the weather, jumping with joy. 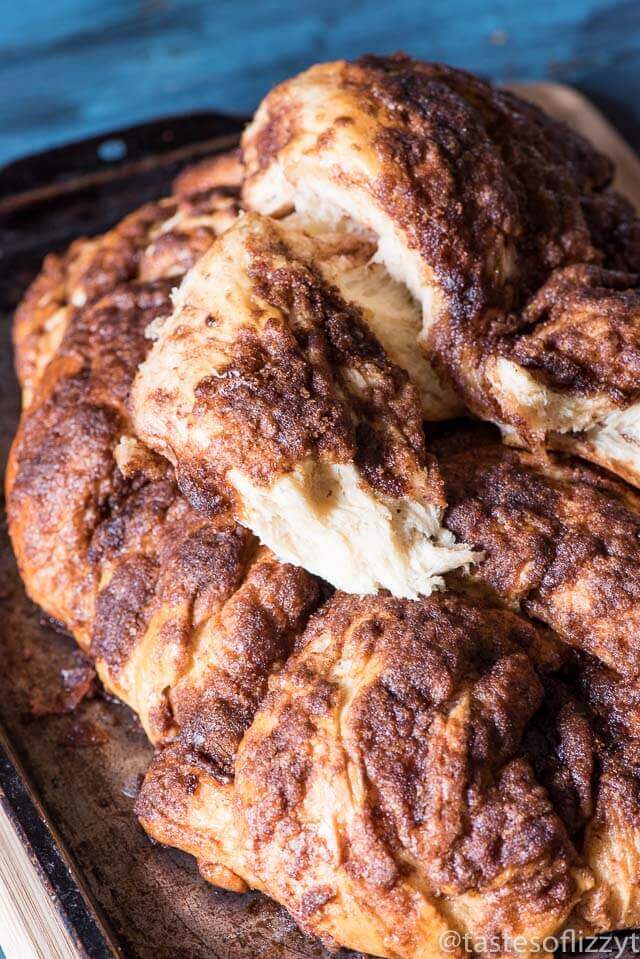 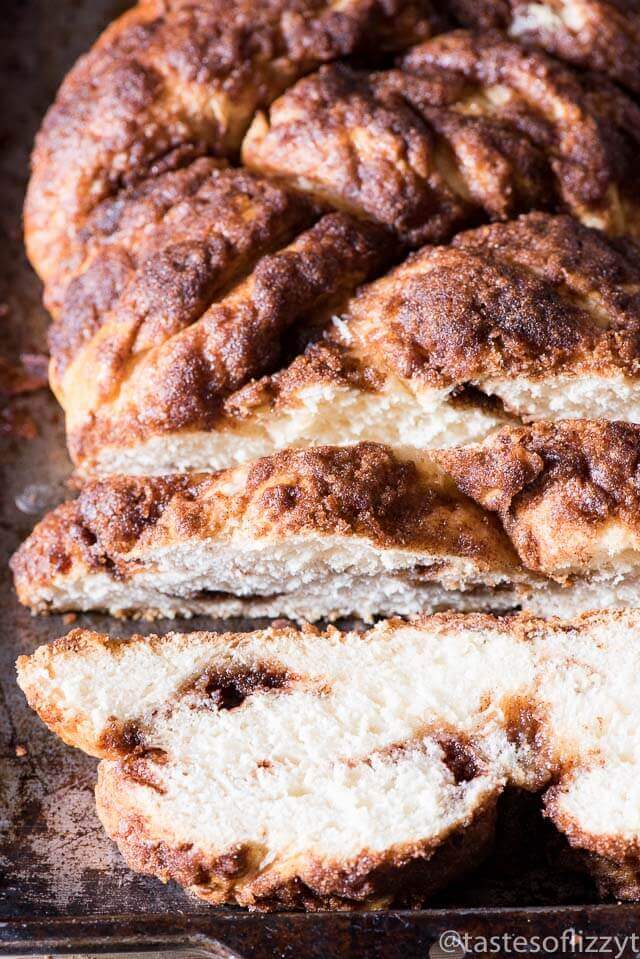 To make this cinnamon braided bread recipe, you’ll mix up the dough just as we explained in over in the egg twist bread post.  After the dough rises, you’ll follow these steps:

-Split the dough in half.

-Divide the halves of dough each into three sections.

-Press the three sections on the top together and simply braid them together gently, and secure the ends. Then do the same thing with the other half.

-Put the egg wash on the bread loaves, and spread on the cinnamon streusel.

-Let the loaves rise again, and then bake them.

And then EAT them!!! That’s the best part. 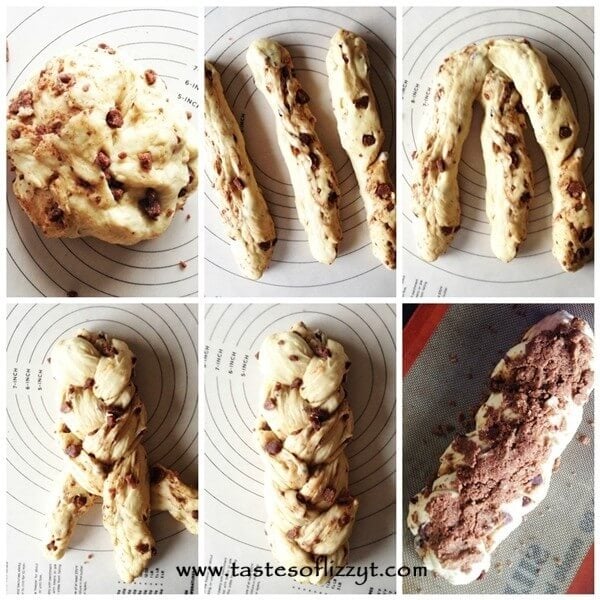 This braided bread is worth the bit of time that it takes to make it. It might be tortuous awaiting the dough to rise and you might need to sneak a little cinnamon chip while you’re waiting. But when it finally comes out of the oven and you spread butter all over it, watch it melt and take your first bite…Mmmmmm!! 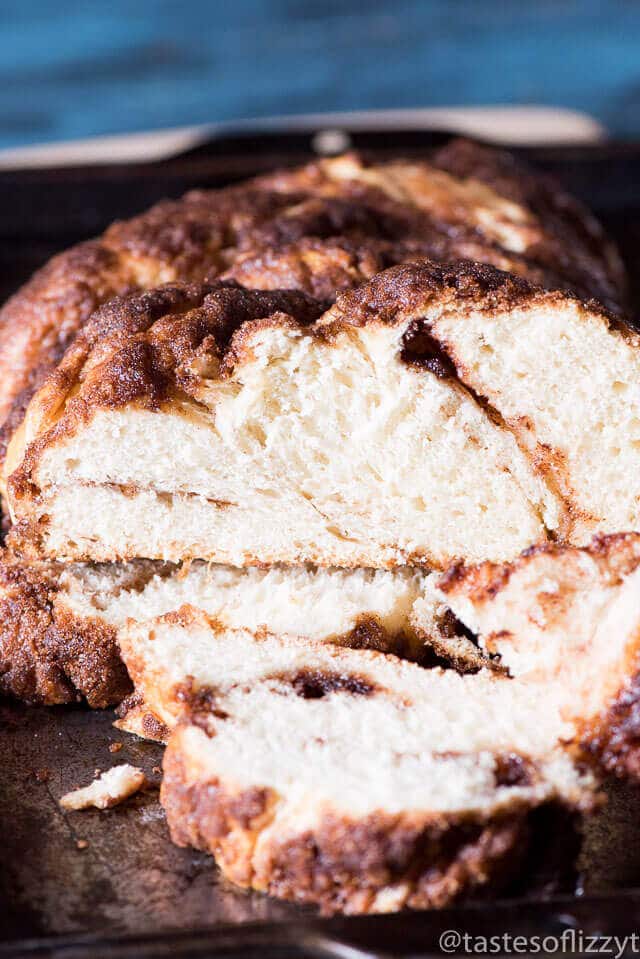 Just look at that soft, warm, cinnamon-crusted bread. Surprise your family so that when they walk in the kitchen they smell this delicious cinnamon-y bread waiting for them to devour.

So stop reading, start baking. It’s definitely worth it! 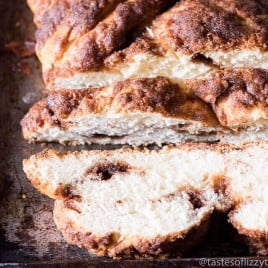 4.72 from 7 votes
Panera has nothing on this bread recipe! Soft, homemade bread makes up the base of this cinnamon crunch braided bread. Homemade cinnamon chips fill the inside and it's topped with a cinnamon crunch streusel.
Servings 20
Prep Time 2 hours
Cook Time 25 minutes
Total Time 2 hours 25 minutes
Print RecipePin RecipeReview Recipe
Prevent your screen from going dark

Do you love cinnamon as much as we do? Find more recipes here.

Find our other sweet and savory bread recipes here.

I’m dying over this bread! Holy yum!! I need this in my life… goodbye Panera!! I bet this would make some mean french toast!

There are two PLACES IT SAYS 1 EGG to brush on top. Is it 2 eggs in the dough or 3?
I don’t know why this is all upper case….

You are making me hungry!! This looks sooooo good! I’m not much of a baker, but I feel like I need to try this! Pinning to save for later!!

Pinned because there is no way I am NOT making this!

I have been on such a bread kick lately – I’ve got to make this one!! It looks so good, and your photos are delicious!!

Is there a way I can substitute coconut oil for butter and something else for milk?

I want to make the Breakfast cinnamon twist, the page for the homemade cinnamon chips is blank, can you help me?

Could this be made in two 4×8 loaf pans?

I have made this several times, it comes out beautifully ❤️. Fixin to make it now, thank y’all

I love this bread! I made it with the cinnamon crunchie bits and I made with a regular cinnamon bread filling. Both were awesome and yes it makes wonderful French toast. The best bread I have ever had, hands down.