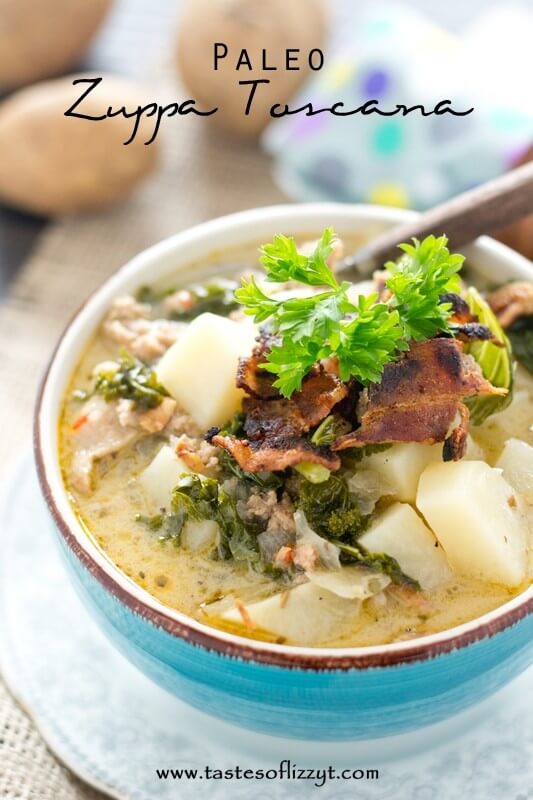 One of my favorite things to eat is soup. And something that I don’t fix very often is soup. I know it doesn’t make sense.  For some reason, soup is generally not what comes to mind when I’m menu-planning.  The one exception is when we are on a Whole30 or eating strictly paleo.  Although I know there are a lot of unhealthy soups out there, soup in my mind equals healthy.

This Paleo Zuppa Toscana is our grain free, gluten free, sugar free and dairy free version of one of our Olive Garden favorites. That creamy soup is my husband’s favorite and we realized how easy it is to make the Olive Garden soup recipe into a low carb soup that would be hearty enough and spicy enough to still bring smiles.

Except chocolate. I do not care for chocolate covered bacon. I’ll take my bacon and chocolate separate, thank you. 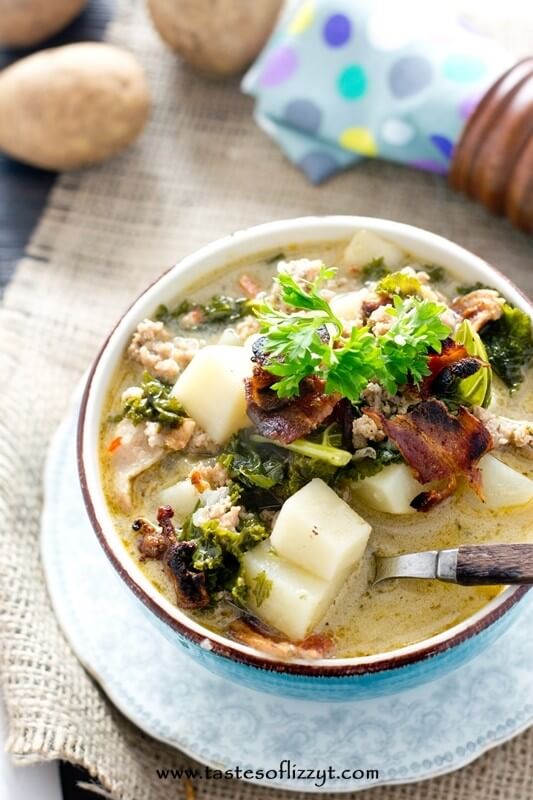 I used our own Italian sausage blend that you can find here. Homemade sausage seasoning is so much better than store-bought. Yes, it takes 5 minutes to throw the seasonings in a pound of ground meat, but the exploding flavor that will happen in your mouth is so worth it. Plus, you get to decide what type of “sausage” meat you use. Our favorite meat to add sausage seasoning to is ground turkey because it is so lean.  I did a little bit of prep work the day before and got a pound of ground turkey seasoned and browned, so the next morning, it was all ready to throw in the slow cooker.

{And if you’re looking for homemade Italian seasoning mix? Try THIS!}

You can also prep the bacon ahead of time, too.  Just a little bit of thinking ahead will make this an easy paleo sausage and kale soup to throw together on those early mornings. 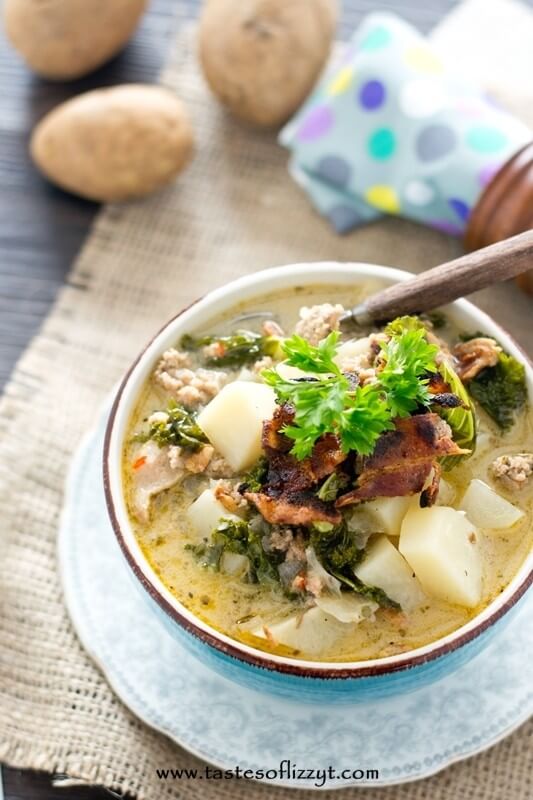 One last thing before you head to the store to get the ingredients for this dairy free zuppa toscana soup.  The recipe calls for coconut milk to make the soup creamy. If you don’t need the soup to be dairy free, you can add whole milk or half and half creamer instead.

The coconut cream (or regular milk) should be added at the very end of cooking.  Make sure that your can of coconut milk are refrigerated and use only the solid white cream from the cans. Save the clear milky liquid for a smoothie or another recipe.  Add the cream in, stir it into the soup a bit so it melts in and voila…you’ve got creamy soup!

I like to double this recipe to fill my 5 quart slow cooker right to the top. That way we have plenty for leftovers. Meal prep can be hard, so having a soup recipe with lots of leftovers makes dinner the next day or even lunches a breeze. 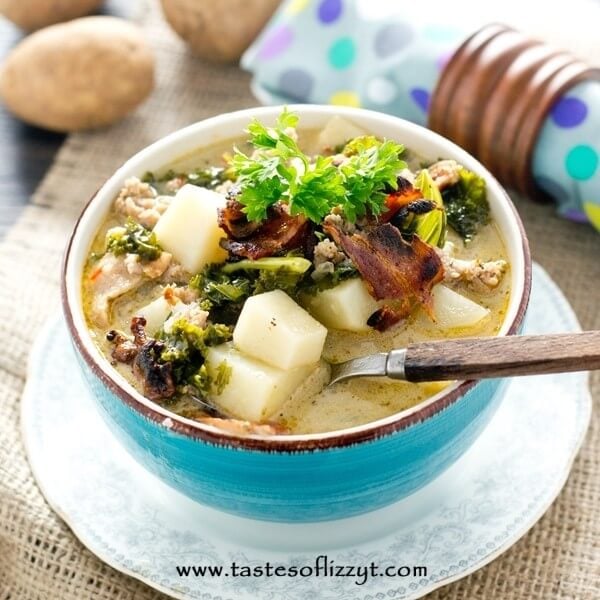 *You can lower the calories in this recipe by using lean turkey sausage and not adding as much bacon. 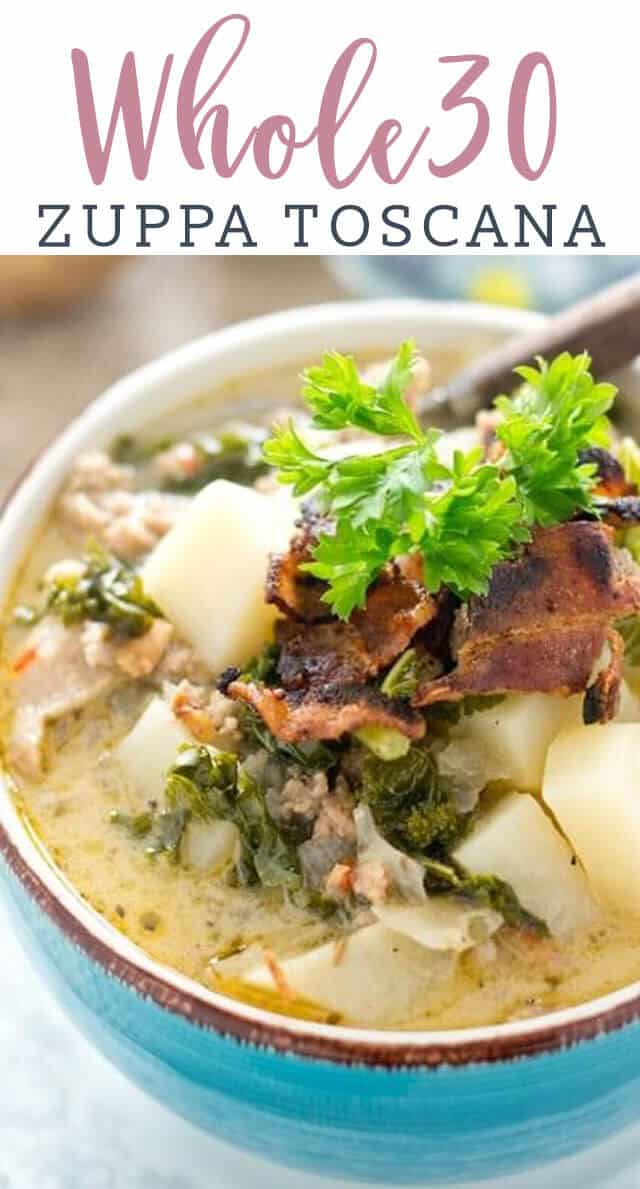