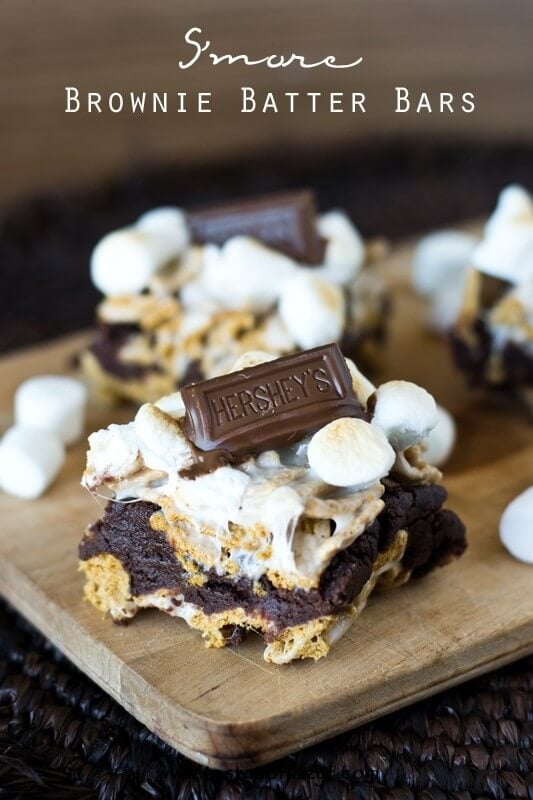 Every year during the summer my family and I will all go on a week long vacation by the beach. One of our favorite things to do (besides relax on the sand or in the cabin) is cook s’mores over the firepit. We have tried alot of things on our s’mores. One of my favorites is cookie dough! We have also tried Starburst and Twinkies over the fire. When it comes to baking, anything is possible! That includes outdoor cooking, too. We’ve figured out that just about any chocolate candy bar you can think of will taste good on a s’more. Reese’s, Snickers, and Kit Kat’s, you name it. But to me, the best way to eat marshmallow, chocolate, and graham cracker by far is to put it in a pan and eat it in little (or big) squares.

Here’s what these layered bars are all about.  The bottom layer is like Rice Krispie treats, only you’re going to use Golden Grahams.  That idea is nothing new. In fact, I’ve been eyeing these Golden Graham S’mores bars from My Baking Addiction since she posted them last fall.

What’s different about this recipe is the brownie batter layer in the middle. You see it there, all thick and chocolatey? 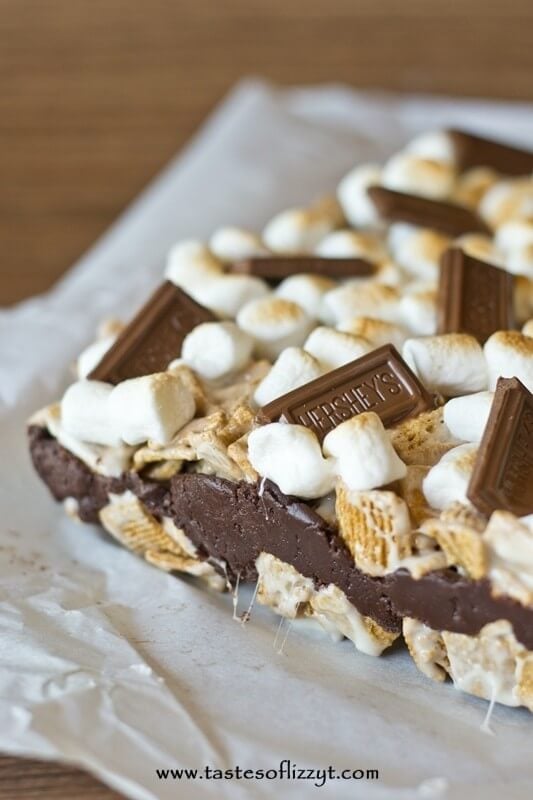 We made this brownie batter simply by adding some 4 ounces of softened cream cheese and 6 tablespoons of melted butter to a brownie mix.

We’ve done the brownie mix, cream cheese, and butter thing before. Our Buckeye Brownie Cookies were just that- plus an egg. We didn’t add the egg this time because you will be eating this as raw batter. You don’t have to cook the brownie part. I personally love eating raw cookie dough, pie dough, brownie batter, you name it. I have no self-control whatsoever of how much I eat. If I have one little lick, it’s all downhill from there. 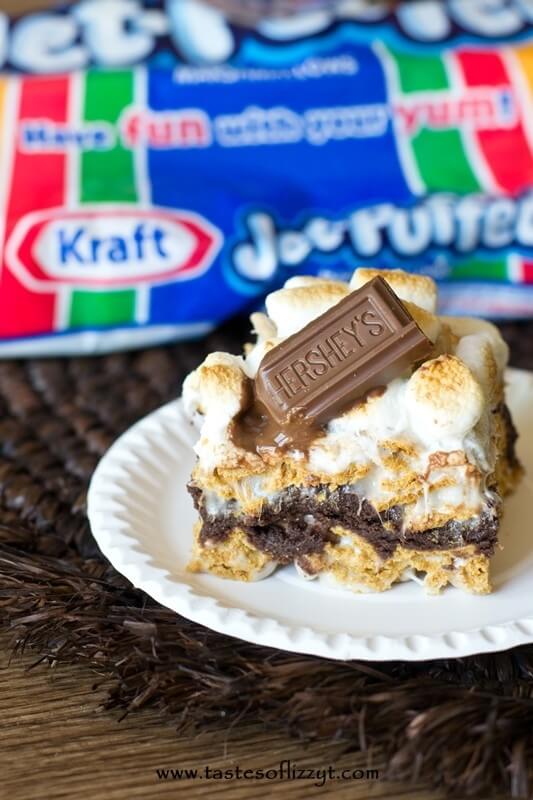 On top of the brownie batter is more crunchy Golden Graham goodness.  You can stop there if you’d like.  We went an extra step and added some mini marshmallows on top and popped them into the oven to broil for just 3 minutes. When those marshmallows are nice and toasty, put a piece of Hershey’s chocolate bar on the top just a few minutes after broiling so they will stick in but not melt completely. 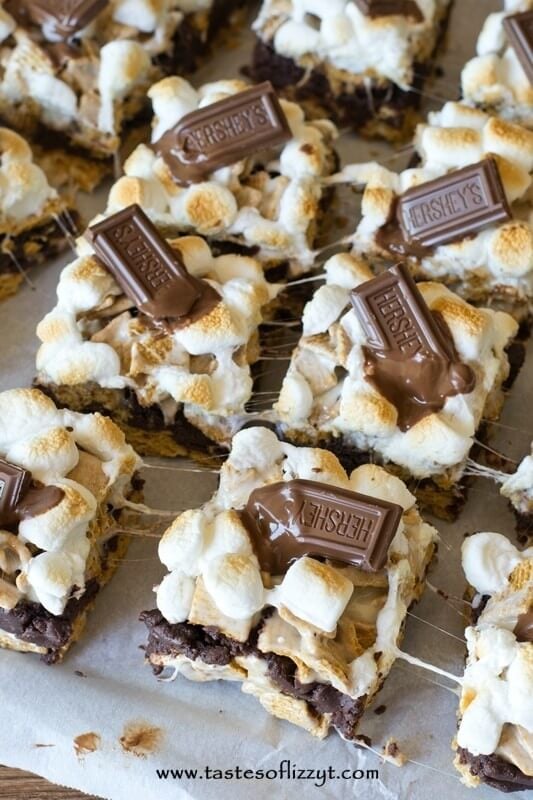 You then have a desicion: eat it now, or stick it in the fridge to set a bit more. My desicion? Eat one when no one’s watching and then you can save the rest for later in the day. My brother and sister and I were all watching these S’more Brownie Batter Bars like a hawk to make sure my mom and dad didn’t eat them all without us. So if you’re eating a treat in our family, five bars will be missing instead of one. That’s just how it goes. We like our sweets. 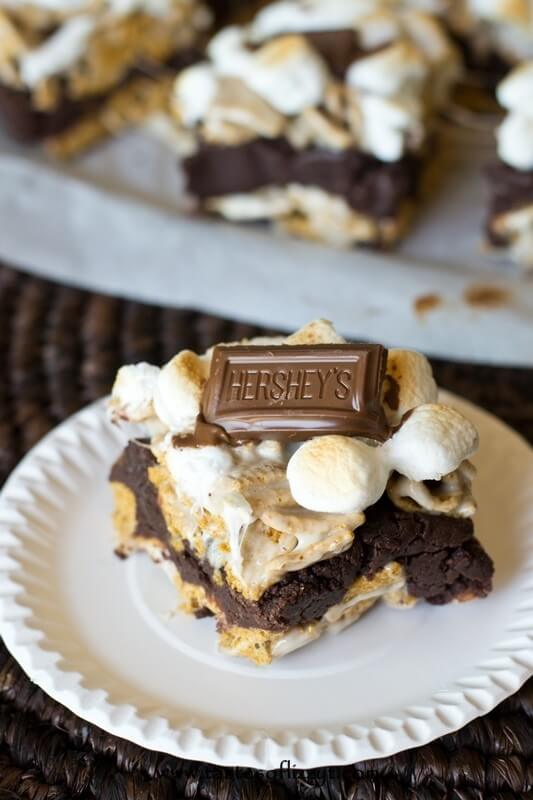 A couple of hints for making these S’more Brownie Batter Bars:

1. Line your 8×8 baking pan with parchment paper.  This makes for super easy cleanup. Of course, it’s not necessary, but so worth it in my opinion. You could also use aluminum foil, or just spray the pan with cooking spray.

2. Make up your brownie batter first so it is already to go once your Golden Grahams mixture is done.  You’ll want to work quickly to press the layers into the pan since the marshmallow will start to harden.  You’ll probably also want to keep some butter or cooking spray nearby to spread on your hands so you don’t end up with marshmallows sticking everywhere. Which wouldn’t actually be that bad because more on your hands means more to taste test! 🙂 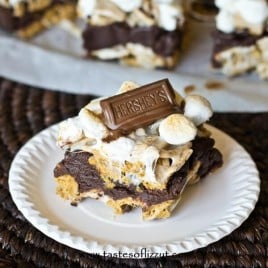 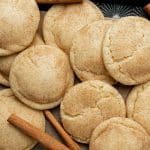 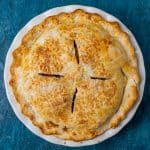 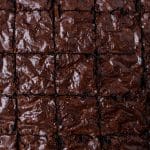 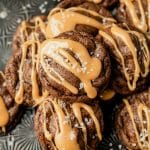 OMG these look amazing! I have been thinking about making some sort of s’more dessert for awhile now. When I saw them I immediately printed off the recipe and added golden grams to my grocery list.

I always love what you guys make! So creative, decadent, and yummy!

Thanks for another great recipe!

I don’t even know what to say; these look amazing! Pinned AND stumbled!

These look a-MAZ-ing! All that ooey-gooey goodness of a s’more. I love the idea of the brownie batter in it. I’ve pinned this to try soon!

Visiting from Totally Talented Tuesdays. These look delicious, I could eat one right now. I co-host Sweet and Savoury Sunday and would love for you to stop by and share this and other recipes with us. Have a great day!

yeah I need all of this in my life! your photos are amazing!

Yikes these look good. Thanks for sharing. Hello from The Party Bunch!

Oh my goodness! I would have to hide these from myself – good thing I have lots of helpers to help me eat these!!

These look absolutely DANGEROUS!! What a deliciously gooey idea!

0
Reply
Sheryl @ Lady Behind The Curtain

This recipe is definitely a winner! I can’t wait to make this for my family. Thanks! 🙂

Those would be dangerous to have in my house, I would not share any of them!! What an awesome combination.! 🙂

A coworker made these for an office party. They were excellent and I will try making them tomorrow. One warning: do not eat when you’re wearing dentures!