Paleo Stuffed Peppers are filled with seasoned ground sirloin and slow cooked to perfection. Served with cauliflower rice and smothered in spaghetti sauce.

Stuffed peppers have always been one of my favorite fall meals. Large, garden fresh green peppers call out to be stuffed with meat and smothered in spaghetti sauce.  I remember this meal being one of my favorites from my childhood.

And then I got married.

Matt always has always loved my cooking, from the first time he tasted one of my freshly baked cookies.  At the start of our marriage, though, it was intimidating to cook for him. I wanted him to like what I cooked and think that I was the best cook ever. Ok, that part has really not changed. I love seeing the smile on his face when he likes what we’ve fixed him.

There was one dish from his childhood that he very much disliked. It was called Six-Layer Dinner. It had potatoes, rice, stewed tomatoes, green peppers, beef and onions.  I thought it sounded quite bad myself, so I had no intent of making it. What I didn’t realize was that one of my favorite childhood dinners, stuffed peppers, reminded him a little too much of the dinner that he’d refuse to eat as a child.

The first time I served this to him years ago, he was very skeptical. I assured him that there were no potatoes or stewed tomatoes in it which comforted him a bit, but he still refused to eat the green pepper.  Without the green pepper, it was tolerable for him and he actually came to love this easy slow cooker dinner. When I made it last week, he even ate the green pepper. Success. I won him over! 🙂

I took the classic stuffed pepper recipe that my mom has used of years and made just a few slight changes to turn it into Paleo Stuffed Peppers, Whole30 approved. An easy, healthy dinner that will be ready to dig into when you get home from a long day. We use beef in this recipe, but feel free to use turkey for ground turkey stuffed peppers.

Although you can bake stuffed peppers in the oven, we like to place them in the slow cooker with a little extra sauce on top. This makes it an easy stuffed peppers recipe that you can fix and forget.

What to Serve with Stuffed Peppers

Serve this Italian favorite over cauliflower rice with healthy, homemade marinara  on top. You can find our favorite marinara recipe here.

You can even make up the peppers ahead of time and freeze them unbaked.  Defrost them in the refrigerator the night before you want to cook them. Then place them in the slow cooker as described in the recipe card below. It doesn’t get much easier, or healthier, than that!

Our package of ground sirloin was 2 1/3 pounds. If you use an even two pounds of meat, the recipe should still turn out. If your peppers are on the smaller side, you'll end up with leftover meat mixture. Make this into a small meatloaf and cook it along with the peppers. You could also use the extra meat to make meatballs. 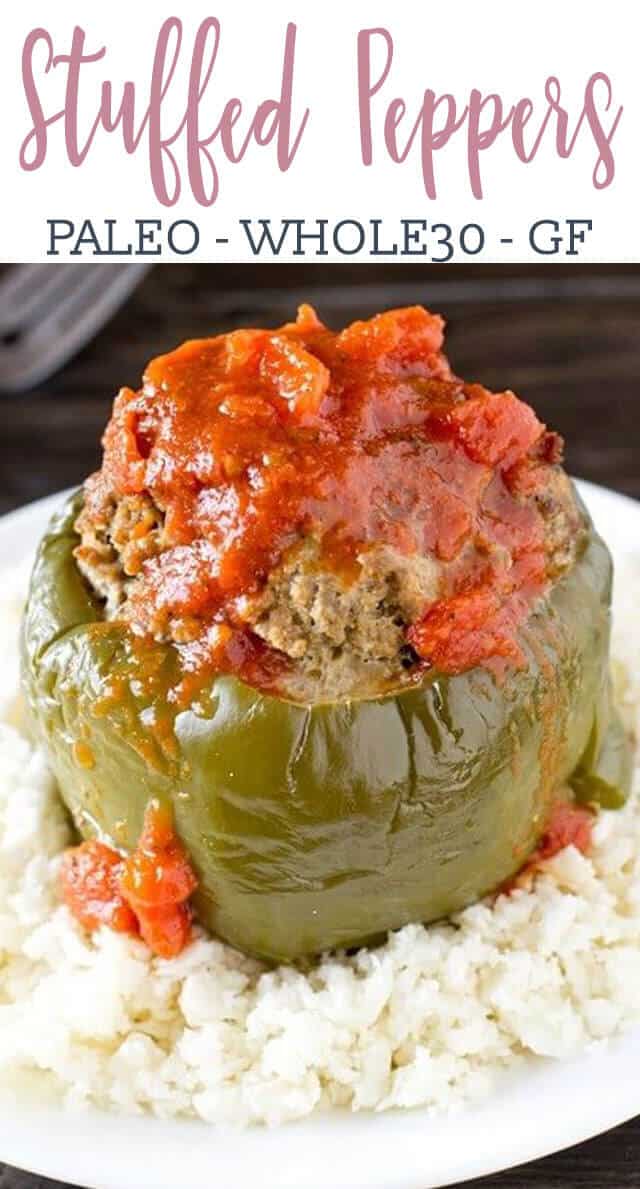