Home » White Chocolate Raspberry Trifle
This post may contain affiliate links which won’t change your price but will share some commission.
JUMP TO RECIPE PRINT RECIPE

Elegant doesn’t have to take a lot of time! This White Chocolate Raspberry Trifle has layers of cake, pudding and raspberry cream. Not only is it gorgeous, but it comes together quickly and serves a crowd. 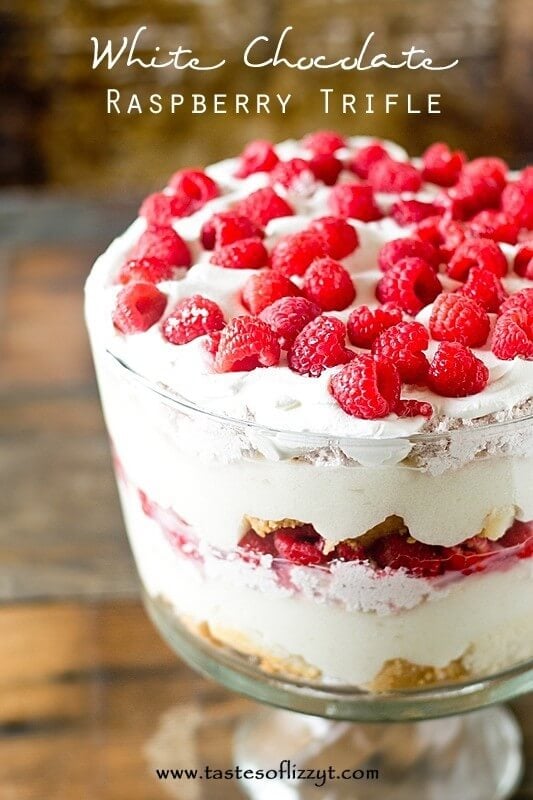 If there is one dessert that I love to bring to a party, it is a trifle. Cake, pudding and whipped cream are all very ordinary on their own, but layer them together with fruit or chocolate and it always brings smiles.

And the biggest smiles come from my husband. His love of pudding is a running joke in our family. Last Valentine’s Day, I made him homemade pudding for the first time. That earned big bonus points for me! 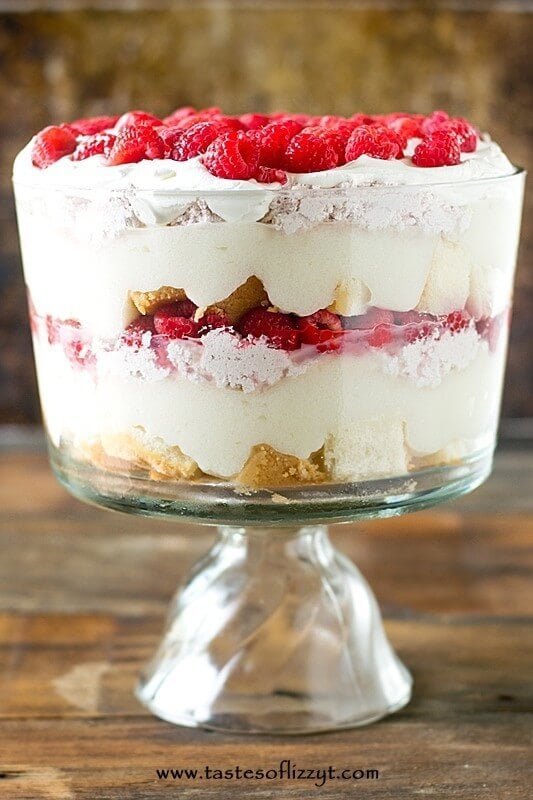 So when it comes to the question of “What dessert should I take to this weekend’s picnic?”, you can be sure trifle makes it high on the list.  We’ve shared  trifles with carrot cake, Reese’s and Butterfinger candies, and peppermint cheesecake (!!). But today tops his favorite list because it includes raspberries. 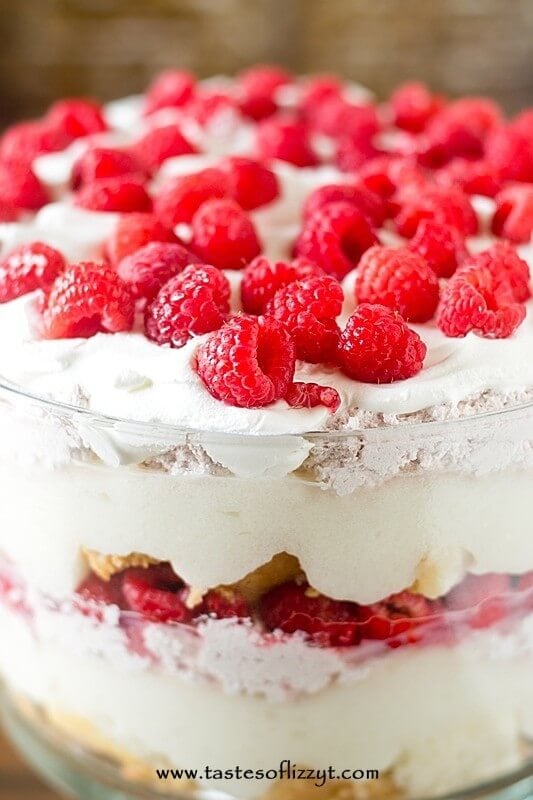 This recipe is fairly easy to make, especially if you happen to have a freezer full of unfrosted cakes.  Which I’m sure not many of you do. We happened to be testing recipes for cake a few weeks ago which means we have an insane amount of cakes, white and chocolate, keeping cold in our freezer. I used some of our white cake as the base layer of this trifle. If you don’t have leftover cake (or cupcakes), you can easily mix up a boxed cake mix, or even buy a pound cake or angel food cake at the store. The specific recipe I used happened to be Recipe Girl’s White Wedding Cake Cupcake recipe, which is a deliciously flavored cake. I highly recommend it! 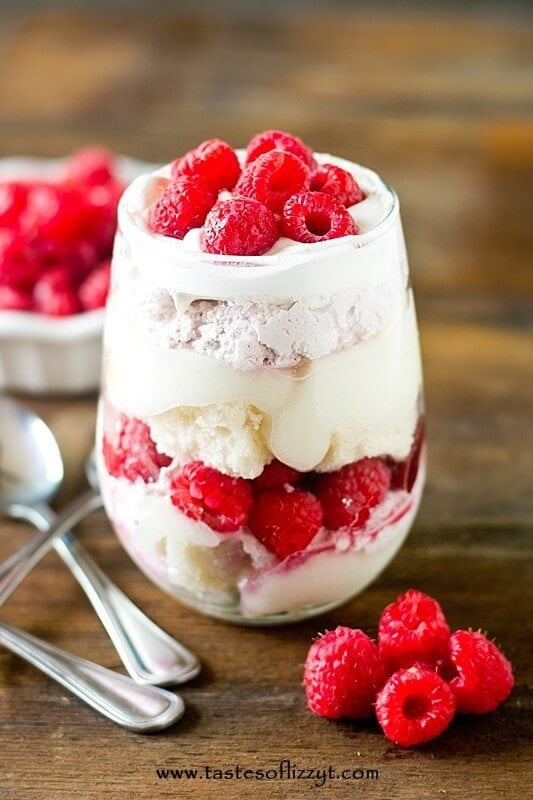 On the bottom of the trifle is a layer of cube caked.  I spooned a layer of white chocolate pudding, made according to the package directions, over the cubed cake.

On top of that is the raspberry cream, which is simply Cool Whip and raspberry preserves folded together.  When you mix the two, the Cool Whip thickens a bit, but don’t worry about the change in texture. It tastes so good!

Lastly comes a drizzle of raspberry preserves, then fresh raspberries. And then you get to layer those four layers again, until your trifle bowl is full.  You may end up with leftover cake or a bit of leftover pudding. It’s hard to say for sure how much of each you’ll use since all trifle bowls are different sizes. Mine is on the smaller size, so I can barely fit two layers of each in the bowl.

I topped the trifle with a layer of plain Cool Whip and more raspberries to give it a pretty finish.

Trifles are great for feeding a crowd, but you can also make single servings in glasses or mason jars. Aren’t they cute?!

Oh, and one last serving idea…add some blueberries for a patriotic look!

Q: Do you love pudding?

Q: Have you ever made a trifle? 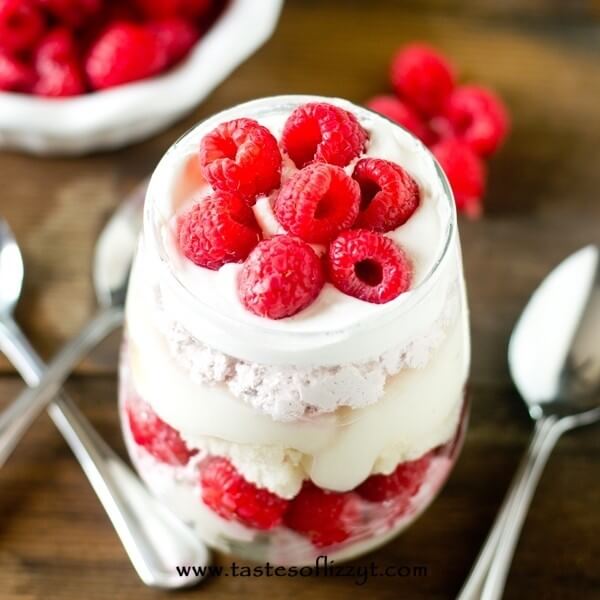 Elegant doesn't have to take a lot of time! This White Chocolate Raspberry Trifle has layers of cake, pudding and raspberry cream. Not only is it gorgeous, but it comes together quickly and serves a crowd.
Course Dessert
Cuisine American
Prep Time 30 minutes
Total Time 30 minutes
Servings 14
Prevent your screen from going dark

If your trifle bowl is bigger, you can make more layers. You can also make individual servings using glasses or mason jars. Layer as described above. 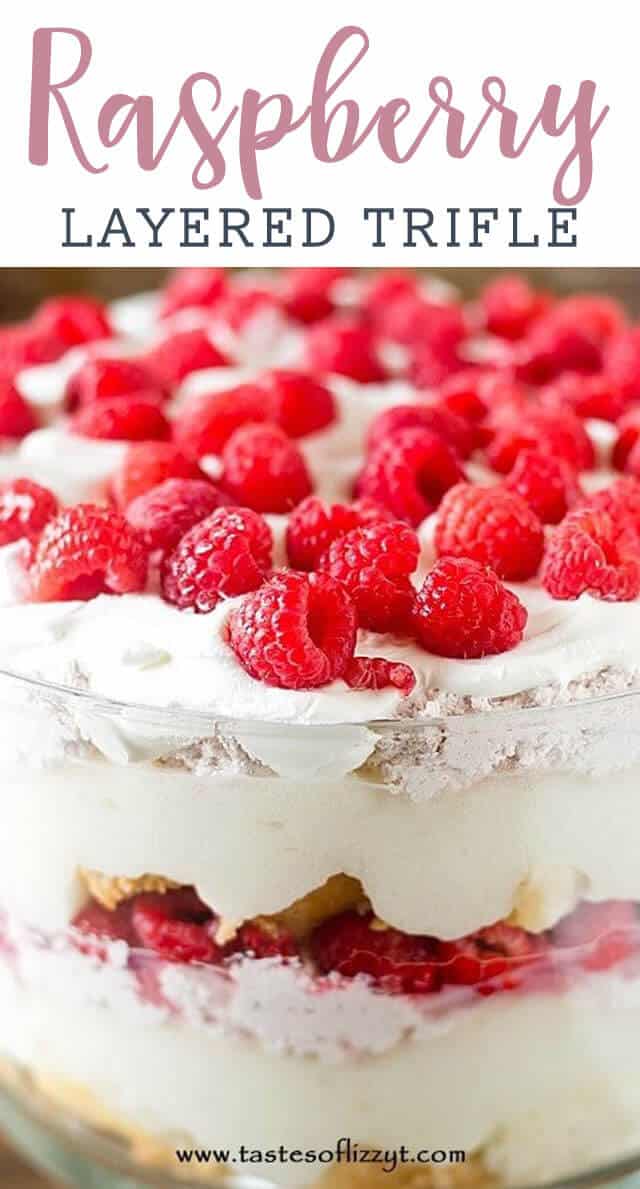 You had me at white chocolate! These look absolutely divine!

Could you use whipping cream instead.of.cool whip with all your recipes including this one? It’s natural!

Do you think it would work with chocolate cake as the base?

Just made it for Christmas Eve. I added dark chocolate curls on top. Tasted it as I was making, Delicious! I have about a quart left over, does anyone know how this would freeze?

Can we substitute strawberry and strawberry jam ?
Also did u make cake from box mix ?
Thanks