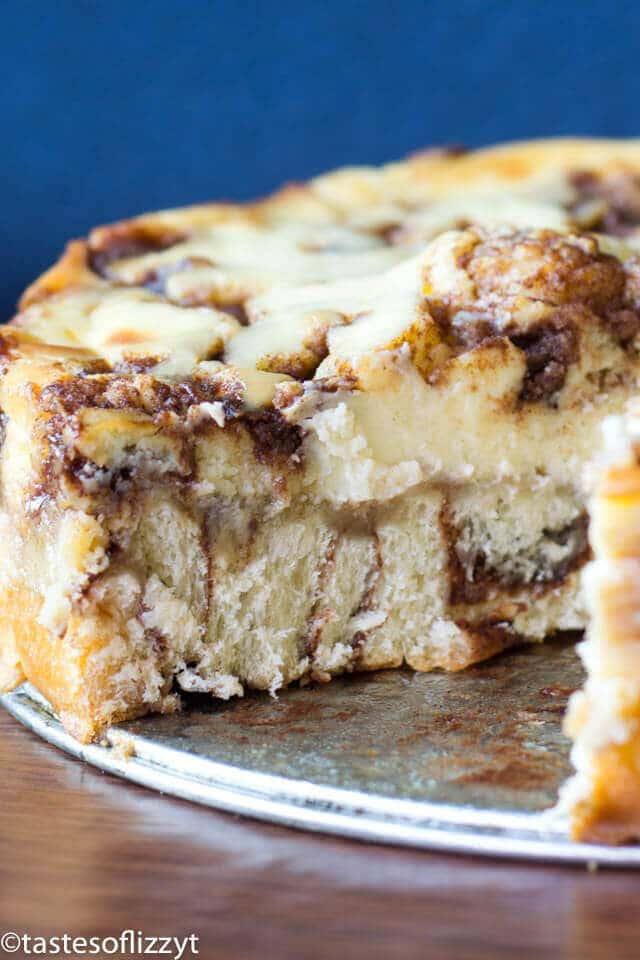 With cinnamon swirled cream cheese and a cinnamon roll crust, this Cinnamon Roll Cheesecake will quickly become your favorite dessert recipe (or even breakfast!). 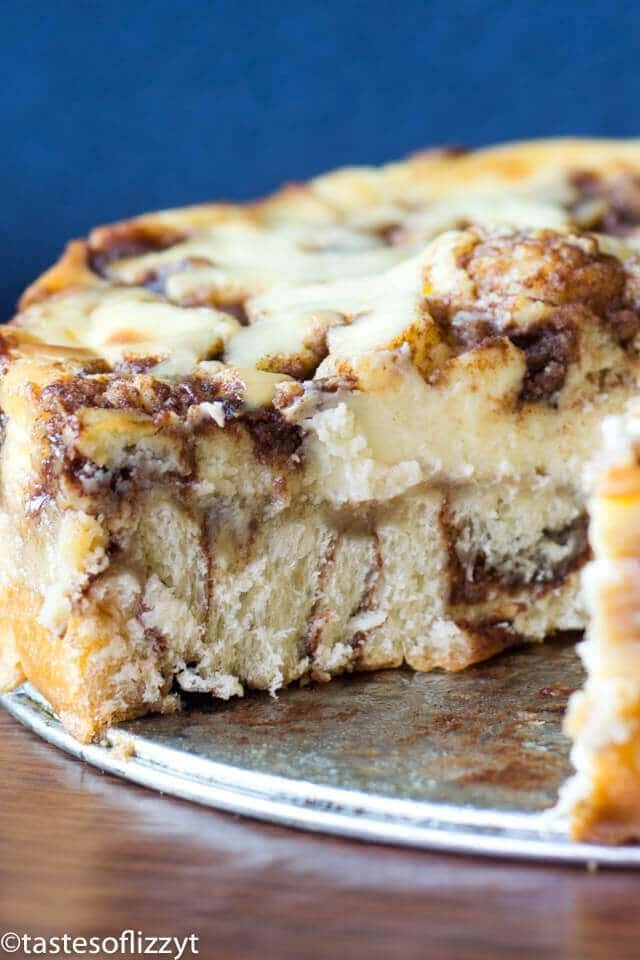 We love our cinnamon recipes around here.  You’ve probably noticed that with some of our other creations that have cinnamon….Upside Down Apple Pie, Cinnamon Roll Pancakes, and Cinnamon Buttercream Cupcakes.

I have to confess that I really wasn’t sure about this creation mom had made while I was at my Grandma’s house this summer. I am not a cheesecake fan. The only advantage to that is I don’t crave cheesecake like my mom does.

I was willing to try this Cinnamon Roll Cheesecake, though, since it sat on top of cinnamon rolls.  I am so glad I did!

If you love cinnamon rolls and cheesecake, you’re going to love this recipe.  It tastes like a gooey cinnamon roll with lots of cream cheese frosting on top!  One of my absolute favorite things!

No way was I about to let mom post this one on the blog. I wanted to be the one to share with you about it! 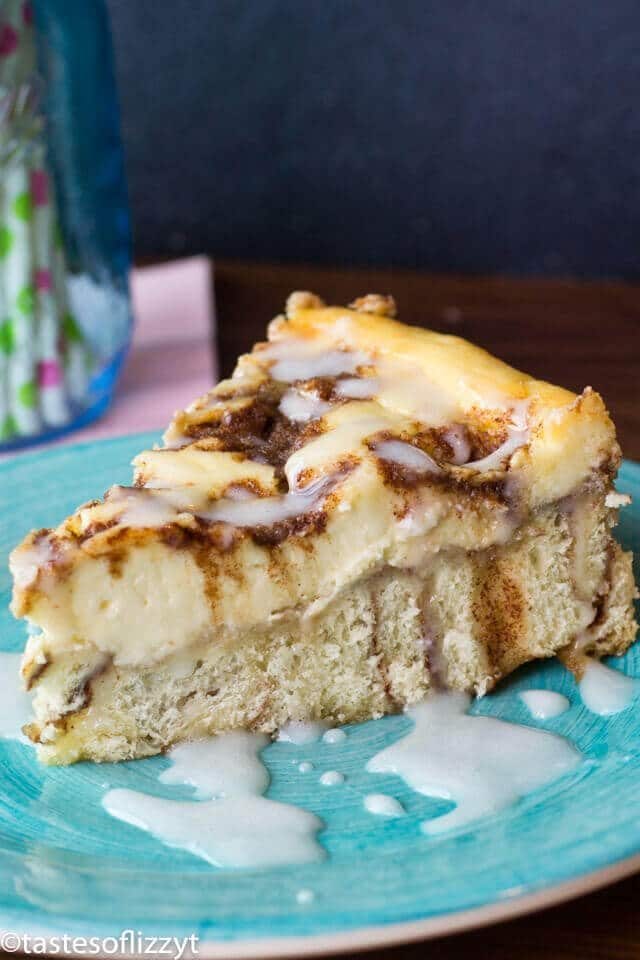 To start this amazing creation off, make your cinnamon rolls as normal, slice them thinly  and place them down in a springform pan. We love homemade cinnamon rolls, but if you are short on time, you can definitely use store bought unbaked cinnamon rolls for a shortcut.

Then comes the fun part. You get to put your hands in there and press those cinnamon rolls until they look flat. I love getting my hands all floury and sugary, but it isn’t every day you get to squish a cinnamon roll! 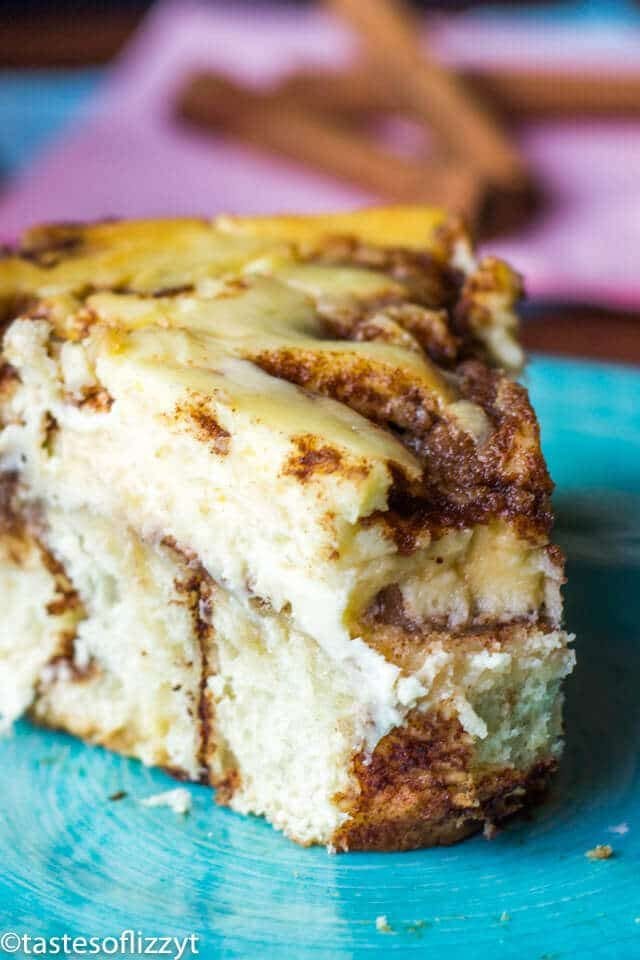 Oh yeah, then eat it.

How are you going to eat it?  You’re going to store this in the fridge, so you can eat it cold, like cheesecake…or you can warm it up a bit and it eat like you would a warm, gooey cinnamon roll.

When are you going to eat it?  Any time, of course.  Breakfast, for dessert, or anytime you need a smile on your face.

My dad should be credited for this recipe. He has some awesome baking ideas, but we all know he needs mom and I to pull it off:) We go to him for some of the creative parts of baking! Thanks, Dad! 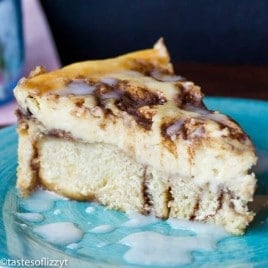 Use store bought unbaked cinnamon rolls for a quick shortcut! Mix a little powdered sugar and milk for a glaze to drizzle on top.

so this recipe for me was disaster the dough must have not proved well as the base was tough and the cheese cake was eggy it must of curdled whilst cooking. im not quite sure what happened as i have made cinnamon rolls and cheese cake repeatedly so i thought it would be a great combo probably wont be doing it again

This looks so yummy! I’m not the biggest fan of cheesecake either, but the cinnamon rolls take it to a whole new level. And I love that it serves both as dessert and breakfast 🙂

This is two of my grandson, Daniel’s, favorite things…cinnamon rolls and cheesecake. Who would have thought you’d have both in one beautiful dessert/coffee cake. I am going to try this soon. I think I will take an easy way by using dairy cinnamon rolls in the tube as a short cut. I’ll let you know how it turns out. Loving your recipes!

Man, I’m hungry! This looks amazing so I guess I’m going to have to make it;-)

I am so going to have to show my mother this recipe. A CINNAMON Roll CHEESECAKE? Whoo, yes!!!

I made this today and was in a hurry so I used ready made unbaked cinnamon bun dough for the base. To fill a 10 1/2″ pan, you’ll need 2 packages. The cheesecake turned out amazing. It was absolutely delicious! Great recipe, I’ll definitely be making it again.

Question: For the tube cinnamon rolls, do you still cook it all for 50-55 minutes? I know those uncooked rolls only take about 20 minutes to bake at the most….I’m concerned about having burned cinnamon roll base and undone cheesecake!

This would be such a fun dessert for a brunch! Pinning to try!

This was awesome! Tasted even better after a few days. Thanks so much!

Mine didn’t turn out. Since I used a 13×9 pan I used 3 packages cream cheese & the ingredients called for plus half. Maybe that is why it didn’t turn out. I baked for 65 minutes and the cheesecake still wasn’t done but cinnamon rolls were starting to burn. ???? I will have to try again with the original recipe and the round pan. It did smell wonderful while baking lol

It should also work in a 11 x 13 rectangle pan, same process. I need min. 50pcs for my daughters school tomorrow .

I made this last Friday for a breakfast pitch-in at work. It was a huge hit and was gone pretty quickly!

Any idea how you would adjust the bake time/ recipe for a small springform pan? I think mine is 8 or 9 in…

I’ve made this cheesecake numerous times and it is always a hit! We’re having a family game night tomorrow night and having breakfast for dinner – one of my favorite things to do – and this will be our dessert! I’m a big fan of your recipes, so please keep them coming. 😊