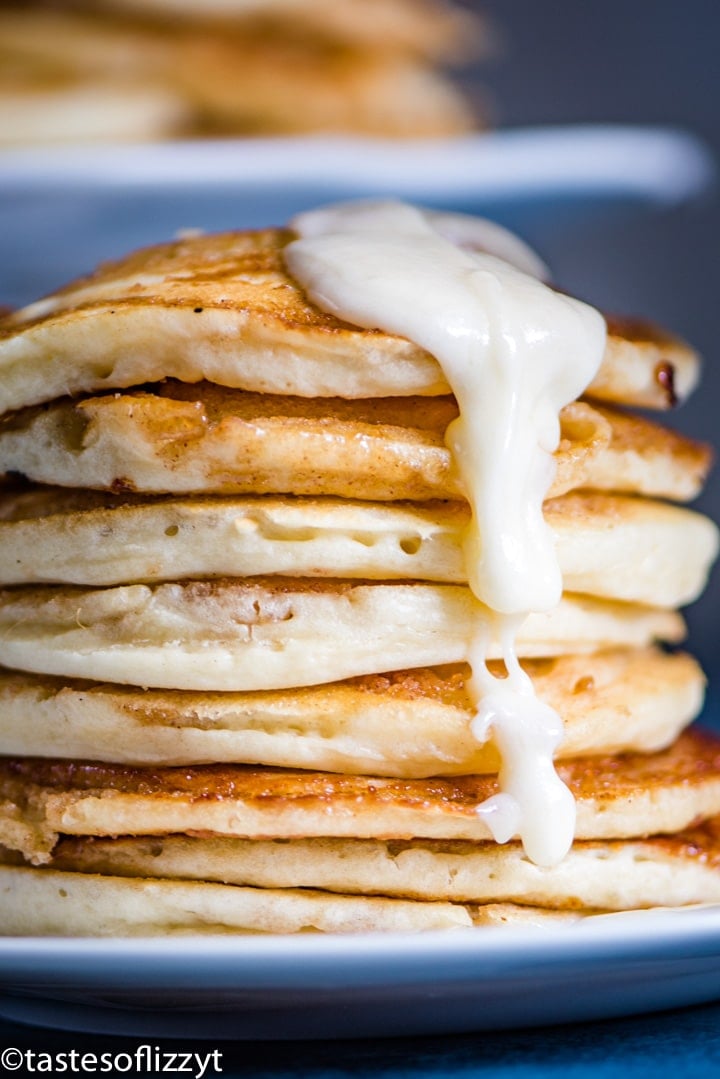 If you love cinnamon rolls for breakfast, you’ll love this jazzed up basic pancake recipe with cinnamon and sugar swirl. The perfect Cinnamon Roll Pancakes!

We’ve shared a lot of great pancake recipes with you. I personally love them all, but this one definitely is on the top of my list. Cinnamon rolls have always been a family favorite in our household. These pancakes are almost as good as the real cinnamon rolls.

These delicious Cinnamon Roll Pancakes originated from the Amish Griddle Cakes recipe I posted recently. The only difference is the awesome swirl that you put in the middle while they are cooking. The swirl is made of butter, brown sugar, and cinnamon. My first bite sort of reminded me of warm, gooey, cinnamony buns.

What causes pancakes to rise?

How to Make Cinnamon Roll Pancakes

How many time should you flip a pancake?

Allow the pancake to cook until the top starts bubbling, then flip it and allow it to cook for a minute or two until it is cooked through. You only need to flip it once.

Why are my pancakes not fluffy?

We love a stack of soft fluffy pancakes! In order to keep pancakes soft, you want to make sure you don’t overmix the batter. Think of the batter like quick bread or homemade muffins…the more you mix the batter, the more gluten will form and the tougher the baked good will be. Just mix until combined. It’s ok if there are a few little lumps. They usually cook out! 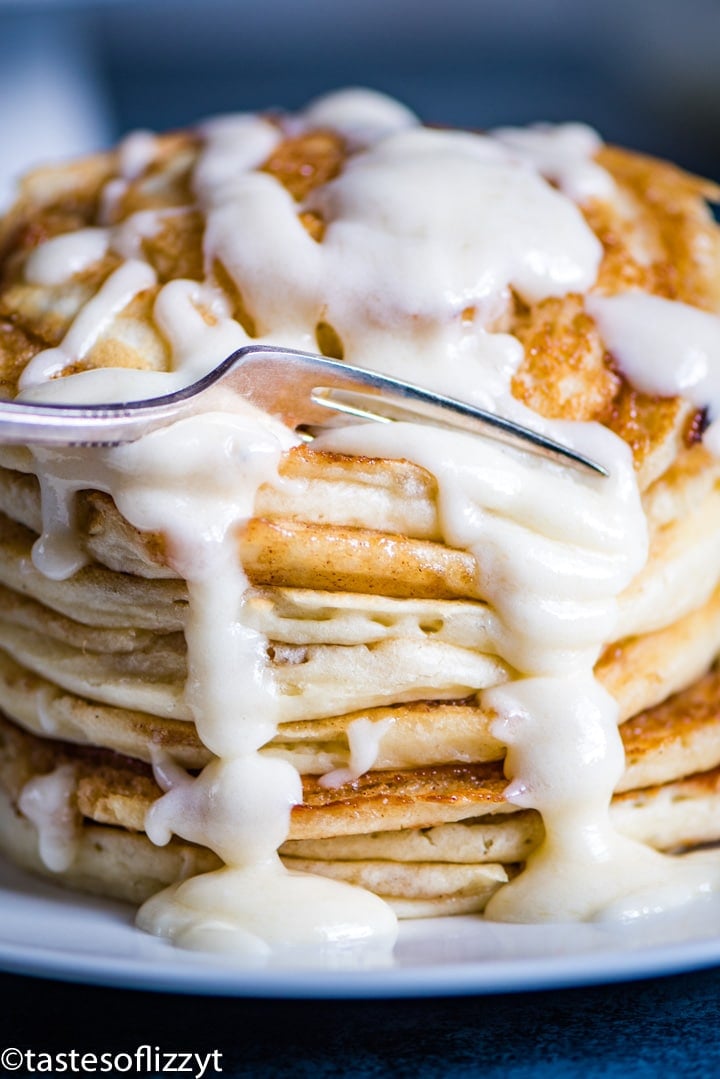 Can you mix pancakes ahead of time?

Pancakes with baking soda such as this one can be prepared the night before and stored in the refrigerator. This saves the mess of mixing up the batter the morning you want to bake the pancakes.

If after making the first pancake they don’t rise quite as much as you’d like, sprinkle a little more baking powder over the batter and gently mix it in. This should revive the pancakes! 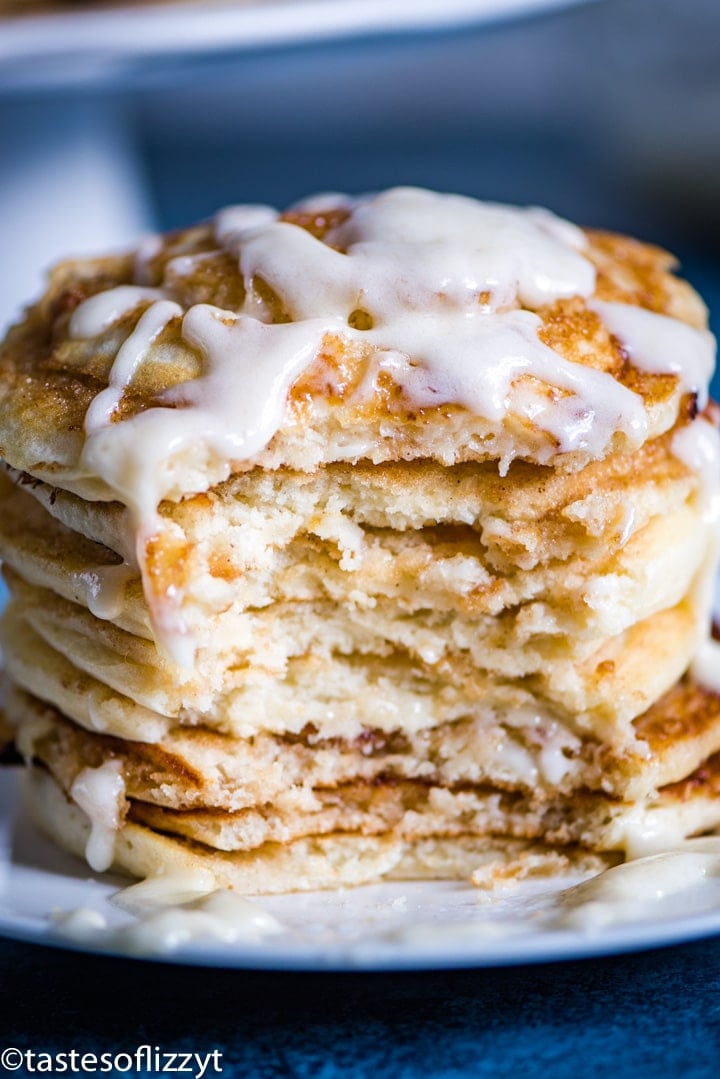 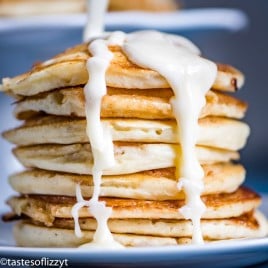 For the cinnamon filling: 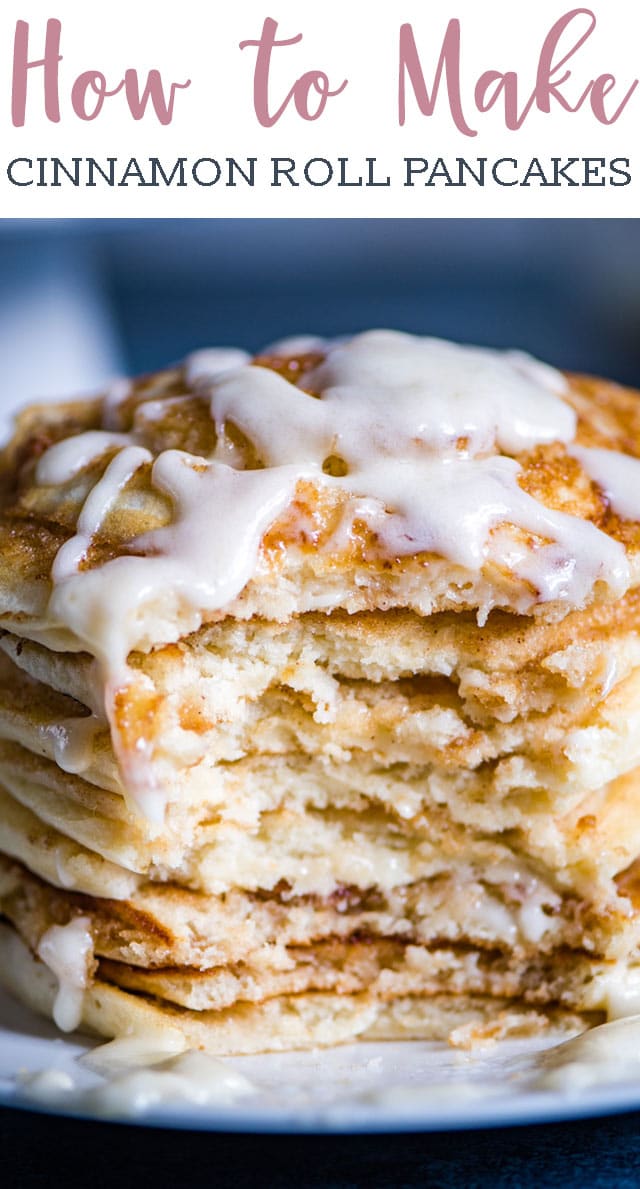 I am definitly triying this tomorrow, only the maple extrac is going to be missing, here it is imposible to find 🙁 Can I replase it with maple syrup?
=)

Hi! I’m just wondering, this says the pancakes are 291 calories but there is no serving size shown so is that 291 calories per pancake? Thanks!

I made these last night for national pancake day????. My boyfriend loved them and my three kids loved them, even my 5 year old who eats nothing. But ofcourse she loved the sugar lol. We all did. Great recipe!

These were tasty! We were craving cinnamon rolls but didn’t have any so found this recipe instead. Made for a lovely Sunday morning brunch treat! A quick note, the first one got a little burned on the second side with the sugar – so make sure the heat is turned down when using an electric stove, and cook longer on the first side so the sugar stays for only a short time on the hot surface. Also, we got four really big pancakes out of the batch (we used a little more than a half cup of batter in a… Read more »

Omg these are amazing! I didn’t have maple extract but they were fine without it. Next time I’ll roast some pecans to crush on top. My family loved them. Even my pancake connoisseur 4 year old said he likes them more than his usual chocolate chip ones.

This is one of the best pancake recipes I’ve ever tried, my kids would say it is definitely the best. The only negative thing I can say is that once you make it your kids will request it every morning.

Sweet! When i made this for breakfast today some of my family members said it was delicious! This one of the best pancake recipe i ever had! 🥞🍫🍩😍🍰🎂🧁

Can this be made as cupcakes?