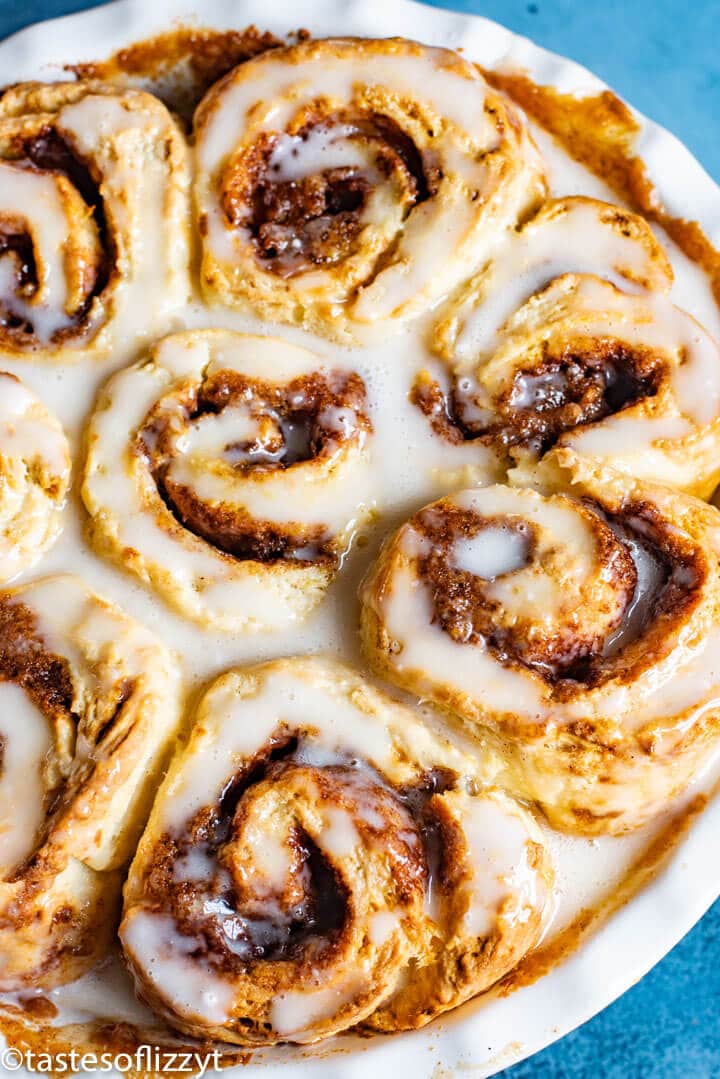 Easy cinnamon rolls ready to eat in under 1 hour. These quick sweet rolls have a biscuit-like texture and are made with no yeast. You’ll love our secret for making them the gooiest cinnamon rolls ever!

Our homemade cinnamon rolls have take Instagram and the interweb by storm. Ya’ll LOVE them. And we don’t blame you one bit!! Those rolls are like no other.

But today we’re sharing just a little twist on that classic roll. Easy cinnamon rolls…no yeast…made in under 1 hour… but they still have our secret ingredient.

Now this needs to be said. We still think those classic yeast cinnamon rolls are the best. These quick rolls are not a replacement and aren’t really even in the same category as a yeast based roll.

However…we’re sharing them because they are good.

Some of you don’t want to work with yeast. Many want something quicker. Some of you are like us and love cinnamon rolls just that much. That you’ll try them any way possible.

Here are the highlights of these quick and easy cinnamon rolls

So let’s talk about how to make easy cinnamon rolls. They start with a biscuit-like dough. There are only 6 ingredients and the dough itself isn’t that sweet. Rather, it’s rich and thick, and because of the sour cream, it’s slightly tangy.

Just as with other quick breads you don’t want to overmix the dough once you add the flour. Mix the wet ingredients well first, then add in the dry ingredients.

Once the mixture is barely combined, you’ll turn it out onto a pastry mat and fold it together just until it no longer feels floury. Don’t overwork the dough. This will keep the rolls from becoming too tough. 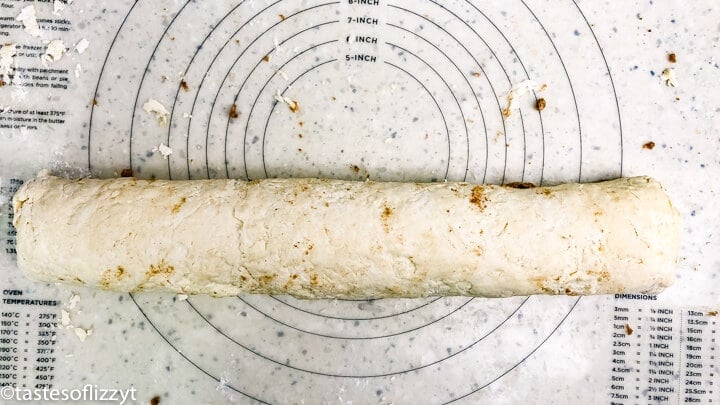 How do you make the Cinnamon Roll Filling?

Our cinnamon roll filling is a simple mixture of butter, brown sugar and cinnamon. We prefer the deep flavor that brown sugar gives. You can even use dark brown sugar for a more molasses flavor.

Add a touch of vanilla or maple flavoring if you’d like.

Mix it all together, spread it on the rolled out dough and then roll the dough up jelly roll style. 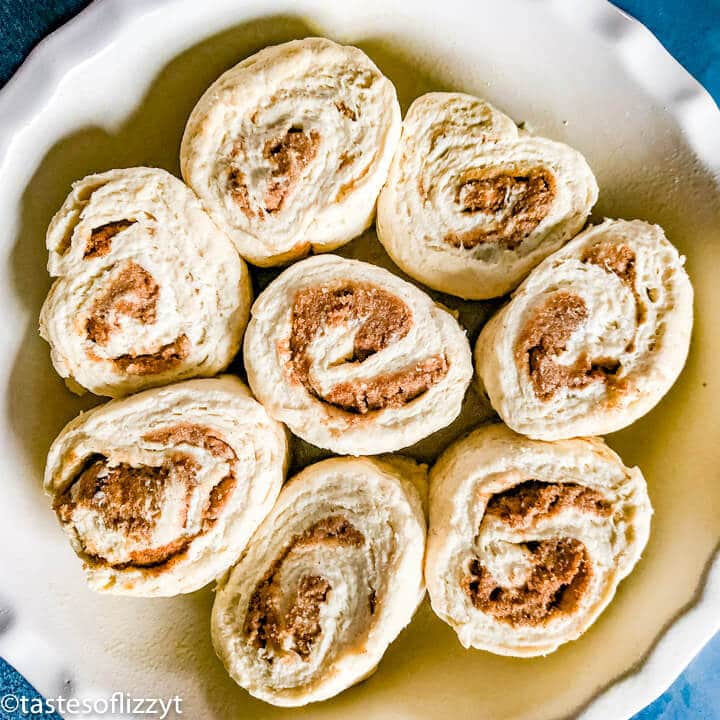 How to Make Gooey Cinnamon Rolls

We cut the dough into 8 rolls. Now this makes 8 LARGE rolls, so if the size or amount of calories scares you off, cut your sweet rolls a little smaller to get more like 12 rolls.

The trick for getting the rolls the gooeyist?? Just as with our yeast based rolls, you’ll pour some warm heavy cream over the cut rolls right before baking. Use about ½ cup of heavy cream. The rolls will look like this: 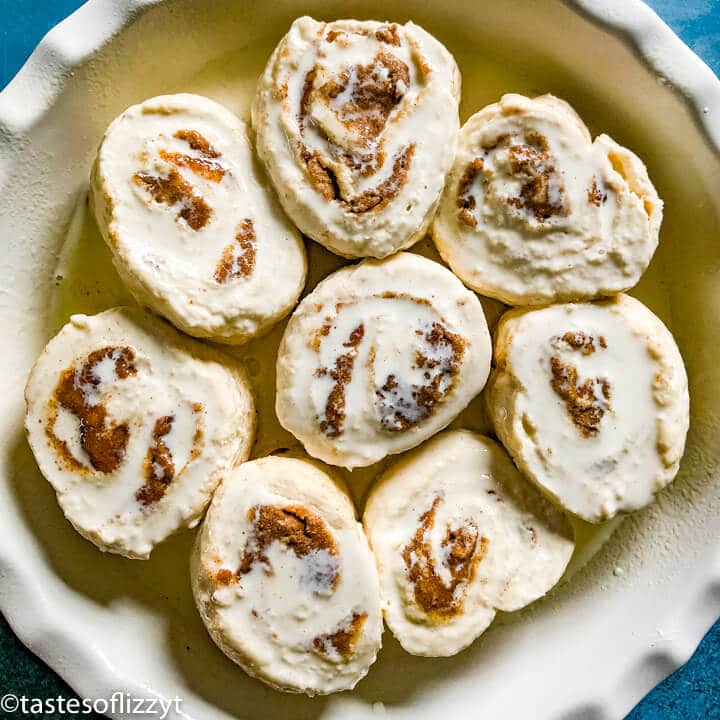 **Pro Tip: What happens if you don’t have heavy cream? Some have used half and half or whole milk with success, but we definitely prefer and recommend heavy cream.**

How Long to Bake Cinnamon Rolls

The cinnamon rolls will poof and rise as they bake. They’ll take about 30-35 minutes to bake. If you find the edges are getting too brown you can cover the edges with aluminum foil the last 10 minutes or so.

Just a warning…once again…these cinnamon rolls are not as soft and tender as a yeast-based roll. The outsides of these biscuit-like cinnamon rolls are golden brown, slightly firm and crisp. They will soften slightly as they sit at room temperature, but we prefer to eat them right from the oven warm.

How to Make Cinnamon Roll Icing

This cinnamon roll glaze is different than our traditional cream cheese cinnamon roll frosting. It is a simple mixture of powdered sugar, vanilla extract and milk. You’ll pour this mixture over the warm rolls. Remember that the biscuit roll dough itself does not have any sugar in it, so much of the sweetness comes from this glaze. 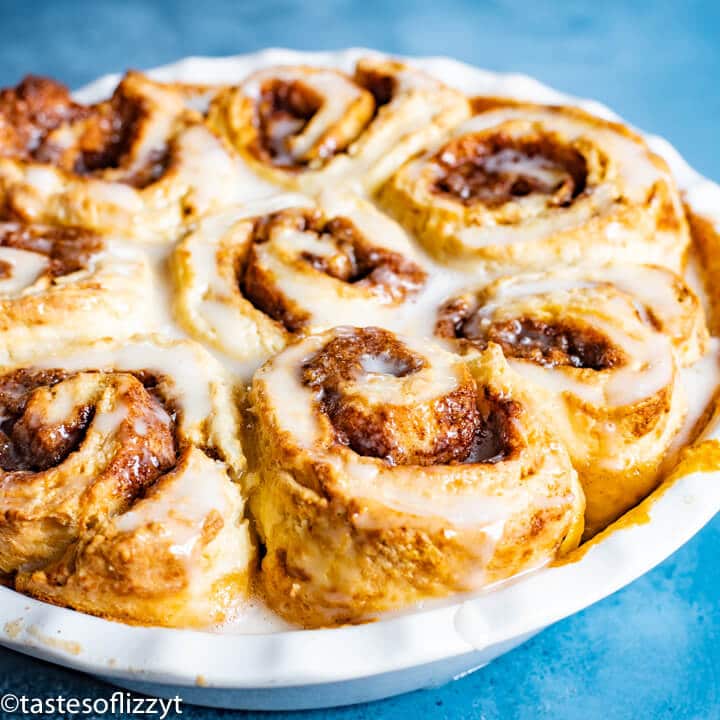 How to Reheat Cinnamon Rolls

These rolls are best eaten fresh from the oven. If you have leftovers and need to reheat them, we suggest doing it one roll at a time in the microwave. It will just take 10-20 seconds per roll (depending on your microwave). It’s quick. It’s easy. And you will prevent the rolls from drying out. 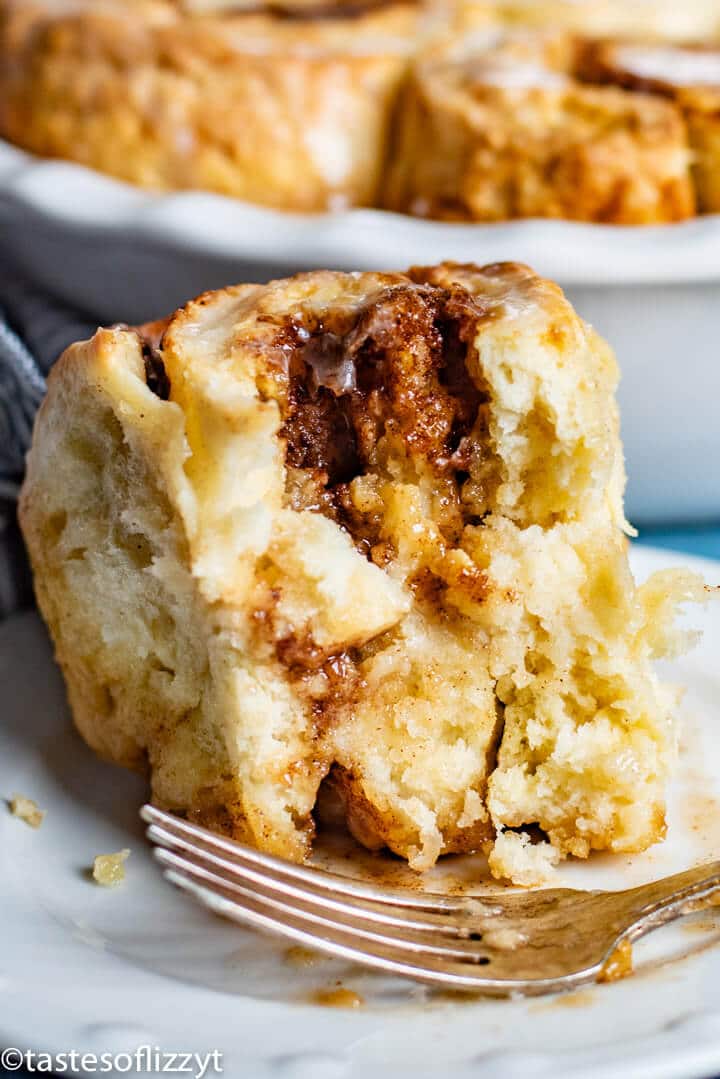 Are cinnamon rolls dessert or breakfast?

Why choose? We say both! We love these sweet rolls in the morning, but they are also fantastic after a hearty pot roast meal. Serve them with a scoop of vanilla ice cream for an extra treat. 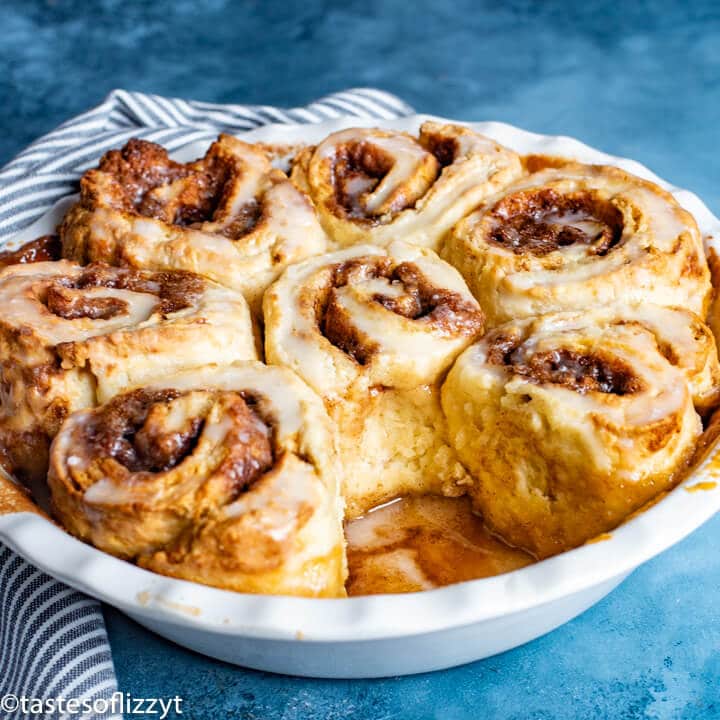 WHAT YOU NEED TO MAKE CINNAMON ROLLS 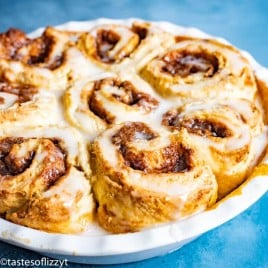 4.67 from 27 votes
Easy cinnamon rolls ready to eat in under 1 hour. These quick sweet rolls have a biscuit-like texture and are made with no yeast. You'll love our secret for making them the gooiest cinnamon rolls ever!
Servings 8
Prep Time 15 minutes
Cook Time 35 minutes
Total Time 50 minutes
Print RecipePin RecipeReview Recipe
Prevent your screen from going dark 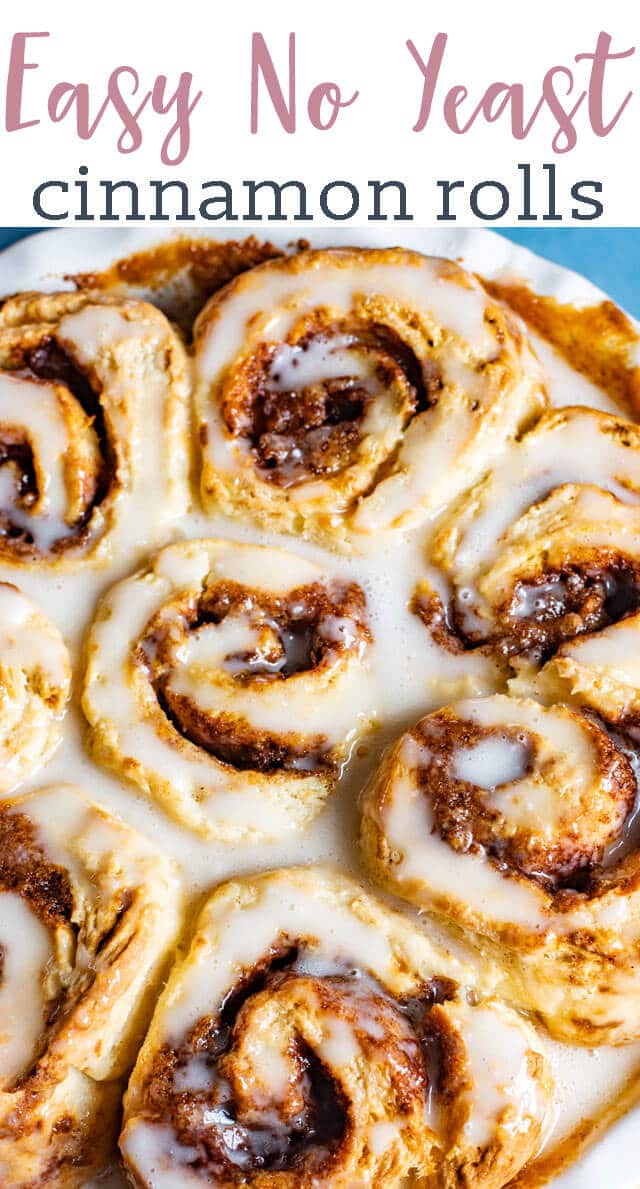 Hello I am looking for a quick easy way to make easy cinnamon rolls without using yeast or waiting something I can make for a family breakfast way also how I can make a orange taste frosting I can put on top. Thank you

Is there any part of this that you could make the night before? Either the dough or the full roll with the filling?

so the ingredients listed for the glaze state to use the whole milk but in the direction it says to use the heavy cream.

I loveeee this recipe! It’s so simple to make and so yummy! I am having trouble with the cinnamon filling coming out the bottom of the roll while it’s baking. It basically carmelizes and hardens under the roll instead of staying inside. Any advice? Thank you!!

Hello Lizzy, I love this cinnamon buns recipe..Thank you.🤗 I will definitely make them and wanted to know where did you purchase your stand mixer? Pia