Home » Apple Fritter Doughnuts
This post may contain affiliate links which won’t change your price but will share some commission.
JUMP TO RECIPE PRINT RECIPE

Apple Fritter Doughnuts are crisp on the outside, light and fluffy on the inside and enrobed in a thick, vanilla bean glaze. They’re made with apple cider and are packed with chopped apples giving them a delicious, fresh apple flavor. One of the best apple recipes to make during the apple picking season! You may also love our homemade apple butter! 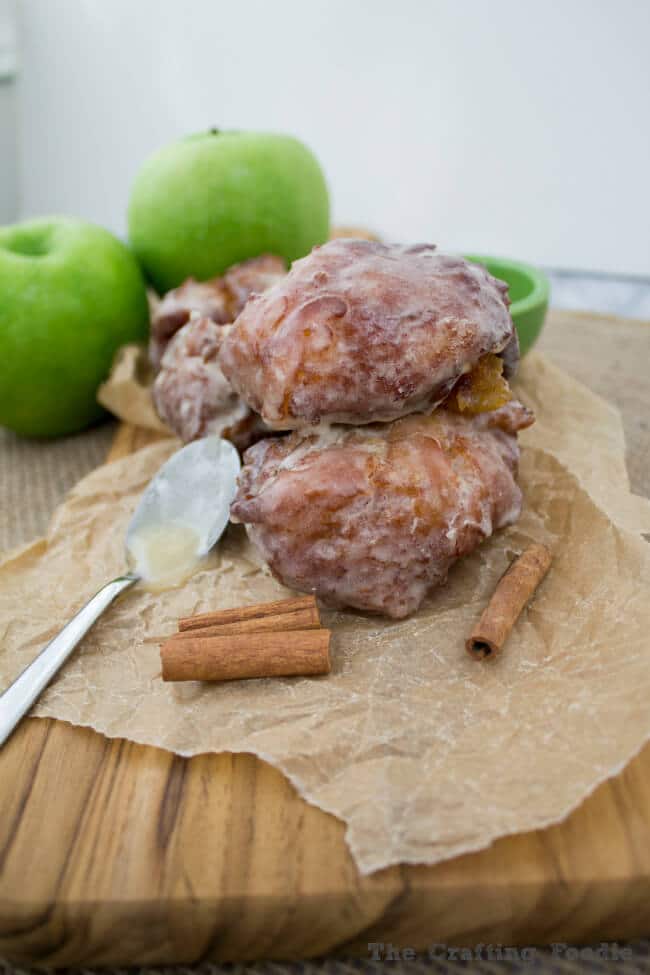 To be honest, I went through 4 different recipes and 2 rounds of tweaking before getting the Apple Fritter Doughnut of my dreams. For the ultimate apple fritter recipe, I knew it had to have 3 things:

This apple fritter donuts recipe has all of those in abundance. 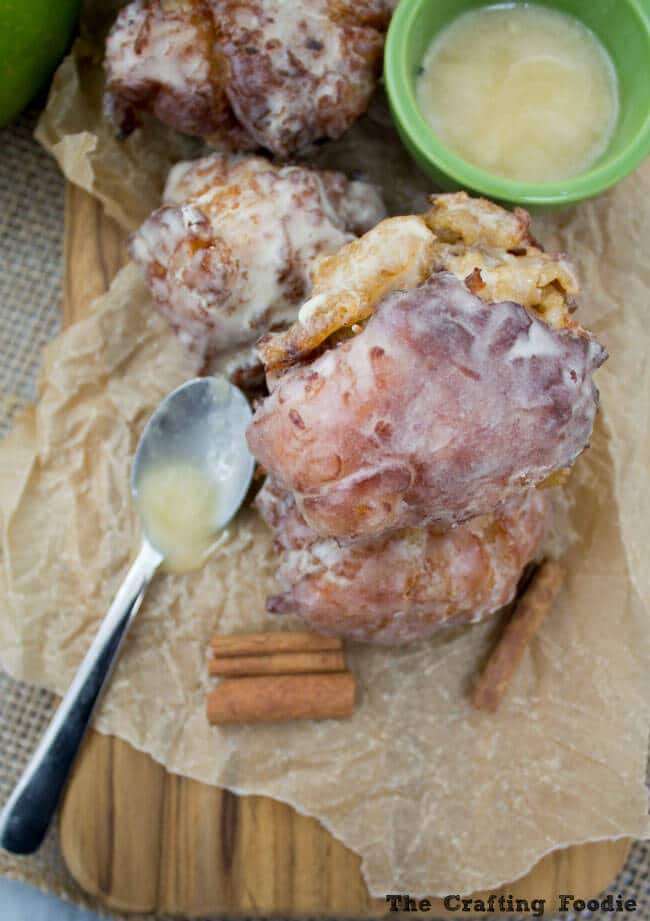 How do you make homemade apple fritters?

You’ll notice that my homemade apple fritters aren’t exactly elegant looking. They’re bumpy and lumpy, but there’s a very good reason for that. On attempt number 5, I realized that when I made pretty, smooth Apple Fritter Doughnuts, the glaze would just drip right off.

My solution to that was simple – just create a bumpy, lumpy surface so that little puddles of vanilla bean glaze would get trapped. That way every bite of these golden, fried confections were covered with a healthy amount of glaze.

To create a nice lumpy surface, here’s what I did. After rolling out the apple studded dough, I cut the dough into tiny, 1-inch squares. Then, I stuck 3 squares of dough to make one Apple Fritter Doughnut. That way, when they fried, the surface was bumpy enough to trap as much glaze as possible!

After frying these doughnuts, everyone who walked into our house commented on how good it smelled. I credit that with the smell of the warm vanilla bean glaze made with vanilla bean paste hitting the freshly fried Apple Fritter Doughnuts. It’s vanilla bean and cinnamon apples mixed into one amazingly delicious smell.

I’m not going to claim that this recipe is fast. It is time-consuming. While making the dough and filling isn’t difficult at all, you need to plan ample time for the dough to rise and rest. Plus, there’s the whole frying thing. While that isn’t difficult either, it is time-consuming. It’s not like throwing a cake pan in the oven. It takes some attention and patience. But, it’s so worth it. 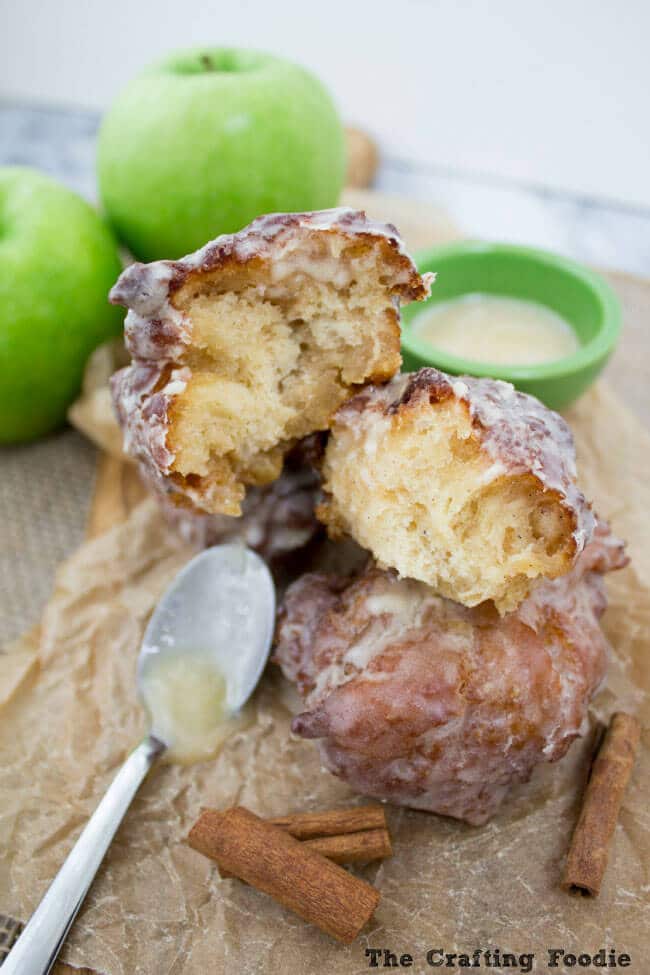 After making these Apple Fritter Doughnuts, I managed to eat 3 of them in one day. The next morning I ran 12 miles, and the entire time, all I could think about was getting home to eat another one! 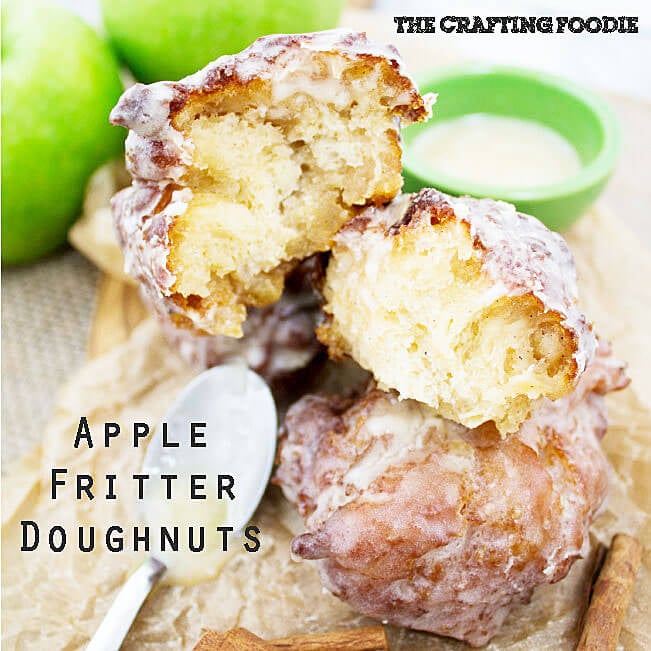 To Make the Dough:

For the Apple Filling:

To Assemble the Doughnuts:

To Fry the Fritters:

This recipe is adapted from Brown Eyed Baker

The history of the fritter is that it is made of leftover dough from other doughnuts that is why they are not perfect and round traditionally in doughnut shops. And that lumpy bumpy gives more surface area for crispy fried parts! I just love these. My local doughnut shop makes small apple fritter bites. I think they are better than one giant doughnut – you get more of that crispy outer area and perfect ratio of glaze and doughnut. Cannot wait to try this recipe. Thank you!

This look amazing – that said, I should never, ever make them. Because I would eat every one of them myself. Normally not a fan of deep-fried foods, I have a soft spot for apple fritters. And these have so many versions of apple in them, that they could almost pass for slightly ever-so-slightly healthy:)

Oh my these are my favorite doughnuts of all time so I may just have to make this recipe!