Home » Mini Cinnamon Rolls
This post may contain affiliate links which won’t change your price but will share some commission.
JUMP TO RECIPE PRINT RECIPE 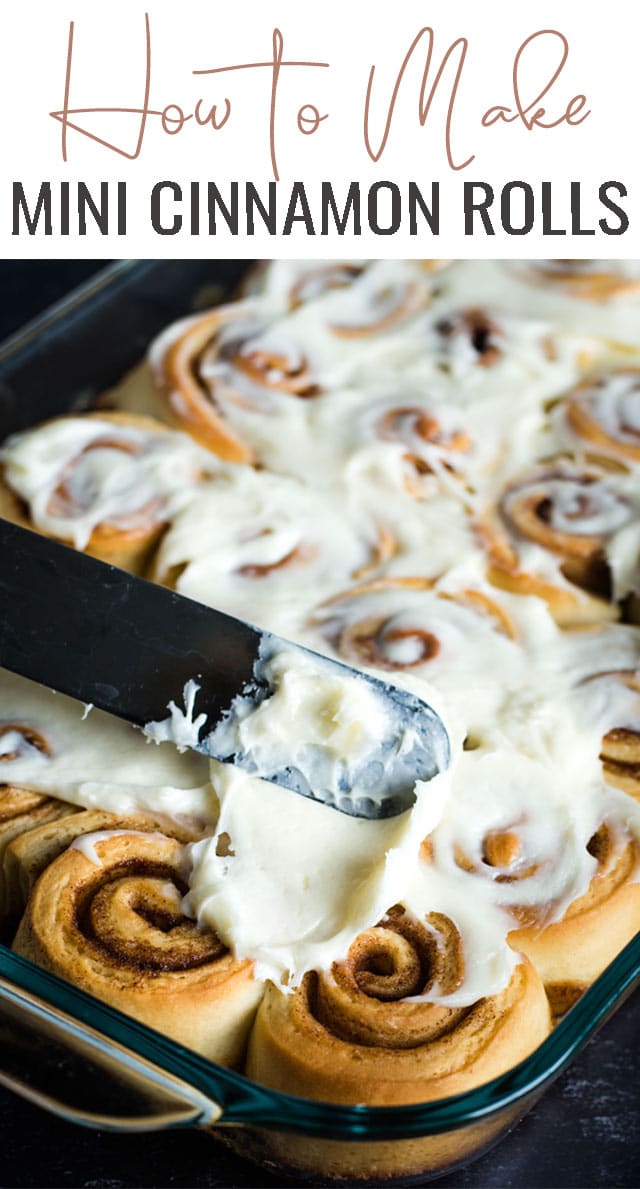 If you’re looking for a little bite of sweet with your morning coffee, try these mini cinnamon rolls with cream cheese frosting. They’re soft and fluffy!

If you love reading the history of where foods came from like I do, be sure to check out this article. Although cinnamon itself comes from Sri Lanka, the cinnamon sweet roll is thought to have originated in Sweden. The British created the Chelsea Buns…the Germans made the schnecken. And the Swedens took their own take on sweet roll dough and made cinnamon buns. This was over 300 years ago!

How do you make mini cinnamon rolls?

The recipe for these mini cinnamon rolls is the same recipe as our traditional rolls. The only difference is in the technique of rolling the rolls.

I will say that because you have the same amount of dough and make small rolls, you end up with a lot of mini cinnamon rolls. But. They freeze well. And you can share with friends, right?!

If you’re looking for techniques on mixing the dough, visit this post.

For this post we’ll stick with the technique of rolling the dough.

I like to tap on the top center of my cinnamon rolls. If they don’t feel “dough” underneath the top, they should be done. They’ll be golden brown and risen all over the pan of rolls.

The internal temperature should be about 190º Fahrenheit with an instant read thermometer.

**We LOVE our Thermoworks ThermaPen to quickly test bread and cake temperatures. This probe thermometer is AMAZING.  Get it here.**

Can I bake mini cinnamon rolls in mini muffin tins?

Well, you can, but I don’t recommend it for two reasons.

We laughed quite a bit when these came out of the oven! If you are going to use muffin tins, you want to make sure you make really, really small dough rolls so they don’t overflow the pans while baking.

How do you store cinnamon rolls?

Cinnamon rolls are safe to store at room temperature for about 48 hours. After that you’ll want to refrigerate them.

Be sure to keep the rolls covered so they don’t dry out.

How do you soften hard cinnamon rolls?

We find that the easiest way to reheat day old cinnamon rolls is to microwave them for 15-20 seconds depending on the size.

If the rolls are not frosted, you could cover them with foil and reheat in the oven, but frosted rolls will get quite melty as you warm them so beware of that.

What You Need to Make Sweet Rolls 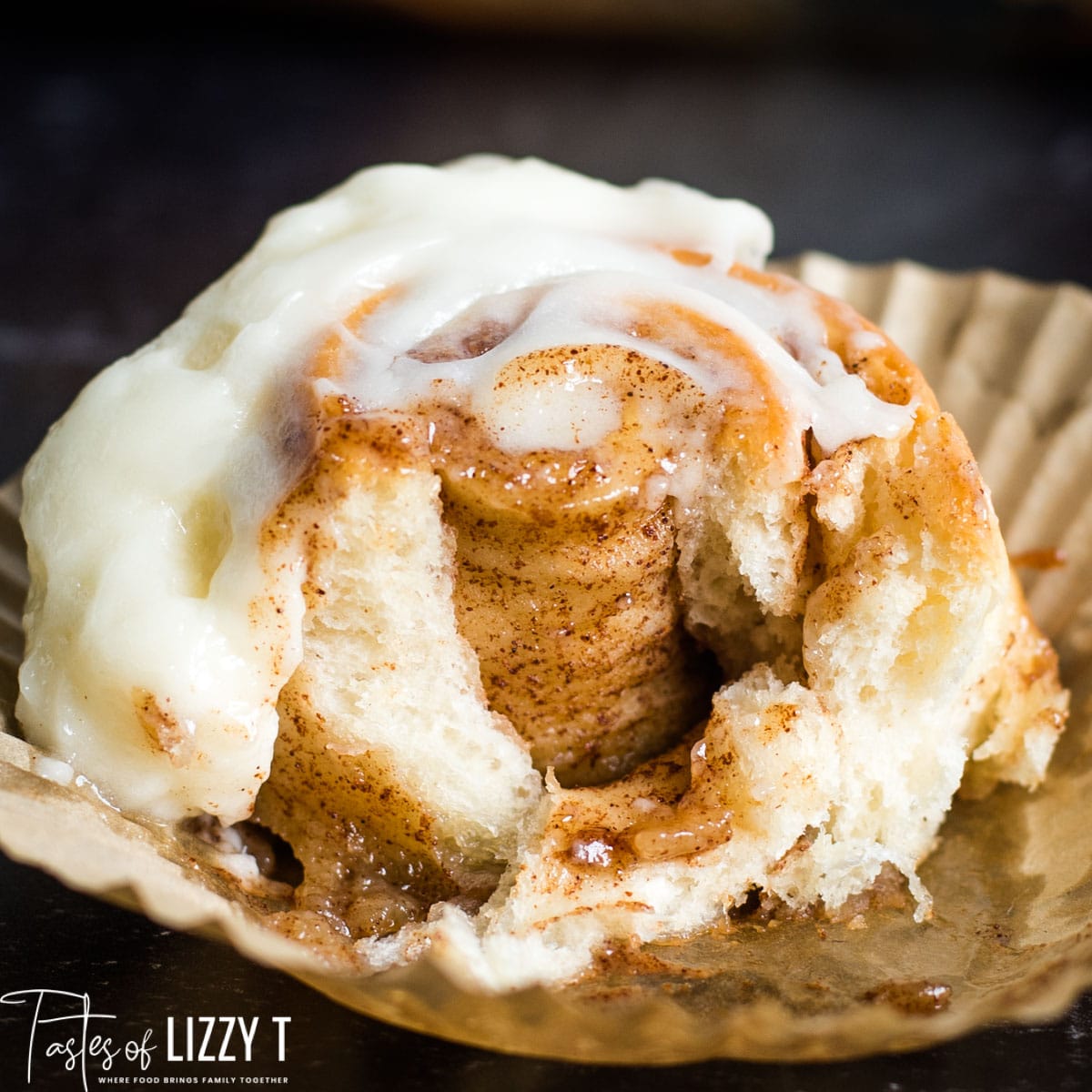 To pour over rolls:

What is the purpose of pouring heavy cream over the cinnamon rolls? I have made cinnamon rolls for years and have never seen this in a recipe. Thank you for your response. Looking forward to making this recipe.

I don’t have a stand up mixer. I use a hand mixer. So I guess I’m unable to make your cinnamon buns. 😓

I’m diah from indonesia.
I was wondering can I substitute heavy cream milk with UHT milk / full cream milk when we pouring the roll? (instruction step 20), coz i have difficulty to find heavy crm. Is there gonna be a different result or texture? hope you can help..,btw sorryyy for my poor english grammar 🙁 hope you still understand what i’m trying to say..

Could you do half the recipe?
Thanks. 🙂

Thank you for your very quick response!

At what point could i freeze these so i can bake them the day I need them?

Hi, I love the full size rolls and get so many compliments when I bring them into work, but 12 or even 24 doesn’t go far enough and people miss out. I’m going to make the mini roll version and see if it’s as big a hit.

Is there a reason you roll the mini rolls up individually rather than rolling the long tube and then cutting, as you do for the larger ones? I don’t trust myself to get them tight enough.

If I want to make these ahead of time can I cover the rolls after they are rolled and put in the 9×13 pans and place in the fridge? Then take them out of the fridge The next day about an hour before I want to bake them and let them rise a second time, pour over the heavy cream and bake?

THe BEST among all the cinnamon roll recipes i have tried!

I was looking for a mini cinnamon roll recipe to take to a pot luck and was pleasantly surprised to find one on your site as I recently discovered your original recipe and they are by far the best cinnamon rolls I’ve ever made. I’m trying to convert my mom to the heavy cream secret. This recipe is AMAZING!!!

This is probably a silly question, but if I make half a recipe, do I use half the yeast and milk? I have never seen a recipe calling for less than 1 pkg yeast. Just want to make sure as hubby loves cinnamon rolls but your original recipe would be WAY more than we could eat in a few days. TIA.

Do you use salted or unsalted butter?

Hi
It’s the first time iv heard of creàm Ben poured over the buns before baking? What’s the reason?

Just tried this recipe for our new years celebration and it was delish! My whole fam loved it. I wonder if I can use bread flour instead of all purpose flour? Will the beating time and speed change? Also do you have any tips on how to slice and flatten the dough evenly? Some of my rolls are bigger and thicker than the others. Thanks! Can’t wait to make these again ❤️