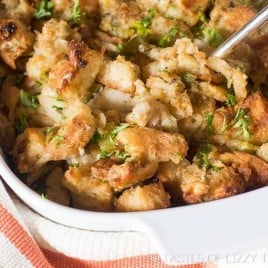 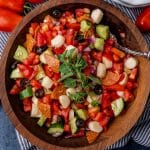 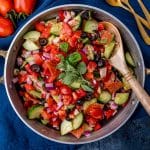 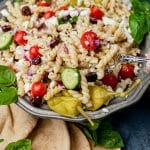 Would this be equivalent to 1 loaf of bread to start with ?

How many loaves of bread to get 13-15 cups of bread cubes?

LOVE, LOVE, LOVE that “Cook Mode” feature! THANK YOU for that! It makes it obvious you’re a pro in the kitchen, only a pro would think to do that for us! Almost like Marmy’s recipe. I add mushrooms, a dash of cream and broth from the giblets FANTASTIC! Everyone who’s ever eaten my stuffing insists it’s the best they’ve had in their lifetime. Such a compliment to a chef!! I blush lol! Have a Blessed Thanksgiving Madam!

This recipe is delicious except – I had to drain the butter finally because it was so much that it wouldn’t all cook into the dressing. And even after draining there was still an extremely strong taste of butter. I couldn’t eat much because it was too rich (and I love butter so that tells you it was a lot). Next time I will use this recipe but only use 1/2 to 3/4 cup of butter.

This is literally the best dressing I have ever made. It was moist and so perfectly seasoned. I didn’t change a single thing to this recipe. Will keep this recipe for anytime I plan a meal with dressing. So easy too!

Absolutely amazing. I have been making turkey stuffing for over 50 years and this recipe was the best and easiest I’ve ever created. My son’s family hosts Thanksgiving. They are vegetarian so my daughter-in-law depends on me to make the stuffing, gravy and mashed potatoes for the meat eaters. She cubed and dried the bread. She likes me to use fresh herbs where possible. She didn’t have poultry seasoning so I improvised with dried sage, marjoram and rosemary and fresh parsley. I did eliminate the eggs and used vegetable broth vs chicken broth. I followed the recipe other than those… Read more »

I made a double batch of this recipe this past Thanksgiving. I mixed it up the day before and had it in the fridge overnight. Instead of putting it in the oven I put it into a couple of small crock pots (oil the sides and bottoms of the crock pots first). I believe I had it in the crock pots for about 3 hours on high, then on keep warm. Stirred it a couple of times during the first 3 hours. It was delicious, served with homemade gravy. Family loved it and leftovers are nearly finished.

I made this stuffing for thanksgiving and had to throw it in the trash. The first bite tasted so strongly of butter that no one could eat it. I thought a cup and a half of butter seemed like a lot, but I didn’t know much about stuffing, so I went with it. I’m shocked this got a high rating. Way too much butter and a waste of my time and money. I’d give it a zero if I could

Can this recipe be made in advance and frozen? I’m always nervous with eggs in a recipe and want to know if anyone has done this. Thanks!