Home » Potato Bread
This post may contain affiliate links which won’t change your price but will share some commission.
JUMP TO RECIPE PRINT RECIPE 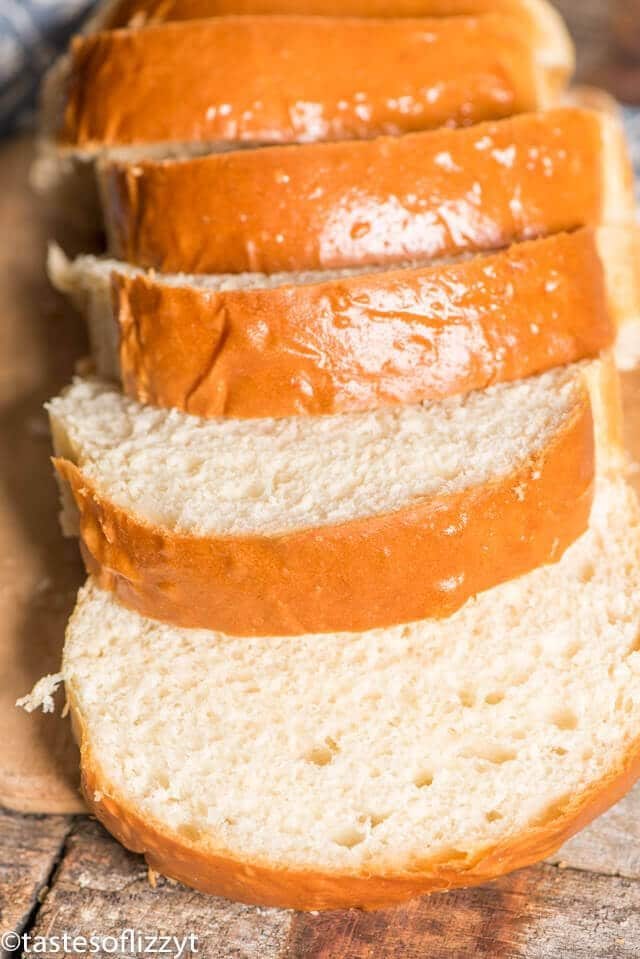 Several times a week for lessons, meetings and appointments, we head “into the city”. Now this city isn’t a big city as some of you I’m sure are used to, but for this country girl, some one-way streets, tall buildings and local shops make up “the city”. Every time we drive into the city we pass by a bread bakery. Sometimes this is an unnoticeable thing, but when they are actively baking bread, everyone in the car swoons over the aroma. And if the dogs happen to be in the car with us? You can bet they get woken up instantly at that delicious fresh-bread smell.

It never fails then, that several times a week I am craving homemade bread. Too many times we’ve come home from dance class and within 5 minutes I’m scouring my grandma’s old cookbooks for a new bread recipe to try. That’s how I stumbled up on this potato bread recipe.

My family is crazy for potatoes and bread…so yeah…this from-scratch soft, fluffy white bread is a match made in heaven for us. 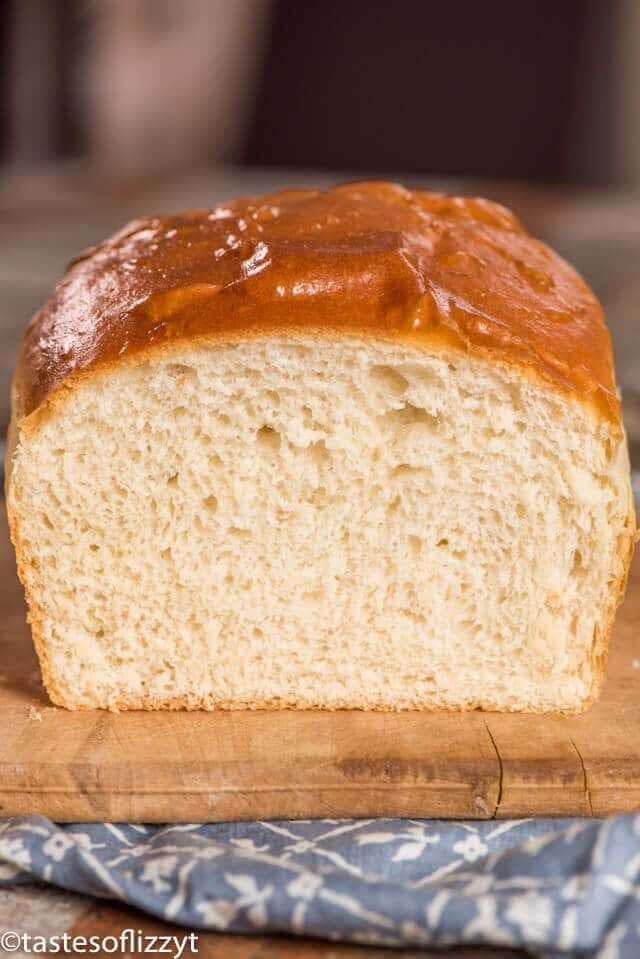 Yes. Really. Although I’m not 100% sure of the science behind it, from what I read and also what I’ve experienced, potatoes tend to make breads rise a little fluffier and softer…and have a great texture. That’s definitely the case with this recipe.

I like to use bread flour in this recipe. It just makes the bread a little sturdier and gives it a bit of a chewy texture. If you’re looking for the ultimate in softness, stick with all-purpose flour.

Oh…and our favorite yeast? Red Star Platinum Instant Yeast. It works perfectly and has never let me down! 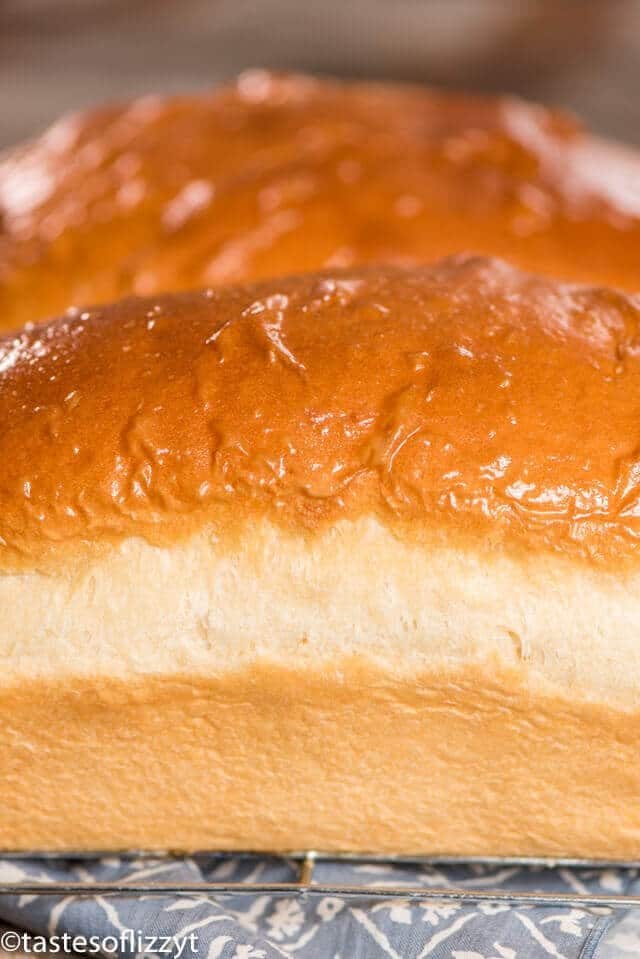 How to Make Potato Bread

Just as with our cinnamon rolls, buttery soft rolls and buttermilk bread, I like to mix bread in the stand mixer. Do you need a stand mixer to make this bread? No. You can just as easily mix the ingredients by hand, then knead by hand for 6-8 minutes. If you’re kneading the bread by hand, I always warn not to add too much flour. The dough should be slightly sticky so that the bread does not turn out dry.

Turn the oven to the lowest temperature and allow it to heat for 2 minutes. Then turn the oven off and place the covered bowl with the dough inside on the oven rack and close the door. Allow the dough to rise in the warm oven. Just be sure you turn off the oven so the dough doesn’t bake!

Enjoy this homemade potato bread…it’s one of the best bread recipes! 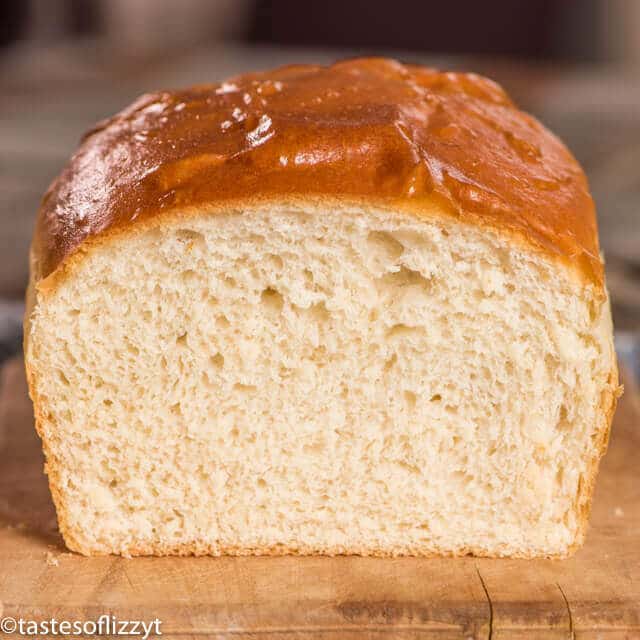 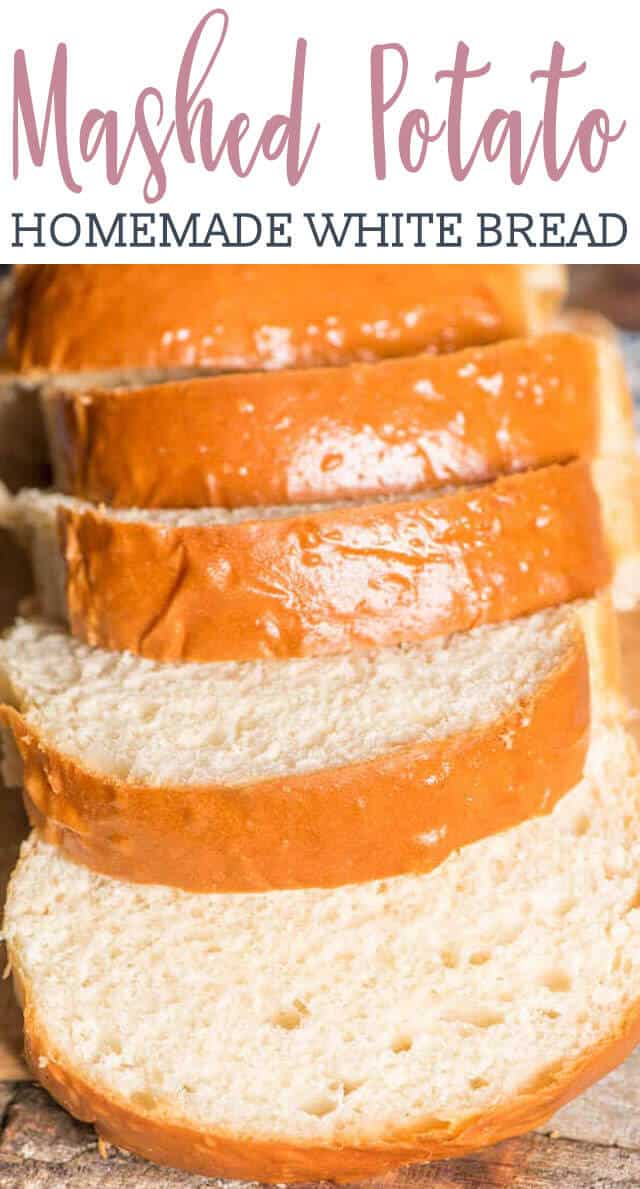 Looks like a good recipe. I have a recipe I will need to find and share for a challah bread I have made.
The steps for letting the dough rise are similar to this recipe.

I just finished making this in the bread machine, it definitely overflowed so not a good idea.
On the flip side, it tastes absolutely amazing! The top looks really ugly because it stuck to the lid, but that wasn’t a problem, I happily tore it off and ate it 🙂
Will definitely be my go to recipe when I have left over mashed potatoes in the future.
As a side note, I used mashed potatoes that had been seasoned with salt, milk and heavy whipping cream. Worked marvously for this recipe.

I always make my mashed potatoes rustic, with skin on. I wonder if that would make the bread too weird?

Can you use a bread machine to make this recipe?

Hi ~ what is the machine / mixer used in the video? Is it a bread machine? Thanks, Zoie

I wonder if you do everything except bake it in the bread machine.

Made this bread tonight. Absolutely fantastic! Thank you for the wonderful recipe.

Have you tried with sweet potato?

OMG I just made this tonight and it is the BEST bread I have ever made! (and I make a lot of bread). We don’t eat dairy so I used the liquid from cooking the potatoes instead, a bit extra mashed potato and then some non-dairy creamer and it is the softest most delicious bread ever. Thank you so much for this recipe! It will be a staple from now on!

Hi, I don’t know if this comment is a repeat, so I apologize if it is. My dough was extremely sticky and did NOT look like it would make two loaves. I followed the recipe, but does the sticky part at least sound correct?

My tops never look as nice as yours, do you use egg wash on top?

Thank you so much

Loved it!
I baked this bread today. You score 10 out of 10 for this recipe! I have tried many bread recipes – but this one is the best! You have a new follower . First time ever I have done a review for any recipe! Thanks

I love this recipe I have made it quite a few times and my family really likes these. I was wondering if it can be doubled?

Wonderful recipe! I made this with instant mashed and it was great. Best slicing bread I ever made.💕

This bread dough seemed very loose and sticky. I added almost another cup of flour. Turned out great!

Hi! Could this bread be made using your Amish friendship bread starter instead of the yeast? Have you done it before?

Hi, just to clarify…how much yeast to use? It says 1 package but just wondering how much is that. Thanks!

This recipe is perfect! So soft on the inside, and what a great way to use up leftover mashed potatoes.
If you aren’t sure about whether to try this recipe or not, let me assure you it’s worth trying!

I’ve been trying to make good, soft regular sandwich bread for a while now. This is by far the best of the bunch. I used leftover instant mashed potatoes that had butter and sour cream in them. I used my bread machine to do the mixing and then let in knead in there for maybe 6-8 minutes. Turned in out to a floured board and rolled it around a bit to get it nice and smooth, less than a minute. Formed it and put it into two buttered loaf pans and baked for 32 minutes. Brushed with butter while hot… Read more »

can i use instant mashed potatoes

My grandmother who would be 116 made potato bread every holiday.
I’ve carried on and have made it every year since I’ve been in my 30’s.
I’m surprised some of my family members don’t realize it’s Grandmother’s recipe.
They can’t get enough of the bread or dinner rolls I make out of the dough.
It also makes great cinnamon rolls.