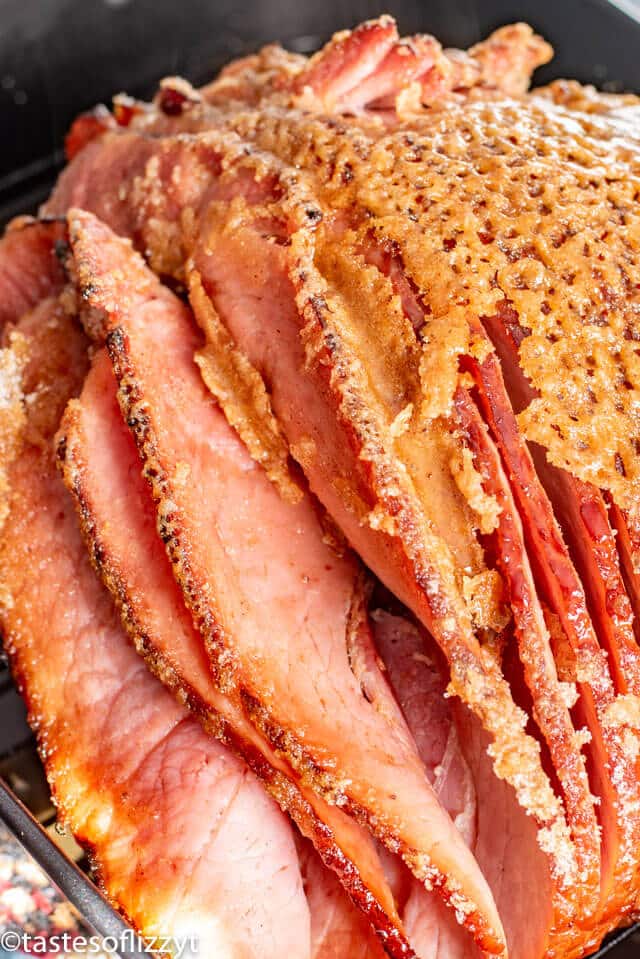 If you’ve fallen in love with honey baked ham, try making it at home! We’ll teach you how to get that famous sugary crunch on your spiral honey ham.

Last year we shared with you one of our favorite ways to bake a ham…with a simple sugary glaze (and our don’t forget our Christmas cranberry ham).

This year we tackled something new…a honey baked ham. This meant lots of recipe testing (which included buying the real deal…rough job….I know!) but we’ve tweaked a recipe to our liking and are excited to share this homemade honey baked ham with you today, just in time for Easter dinner.

There are a lot of recipes for copycat honey baked hams, but the best comes from a book full of “secret” recipes by Todd Wilbur. If you love trying to recreate restaurant classics at home, you should definitely take a look at his book. We tweaked his recipe slightly and are sharing how to get that crispy sugary crust on your homemade hams.

What does spiral cut ham mean?

Although some hams come unsliced, many hams you can buy at the store will say “spiral cut”. So what does this mean? It means there is one continuous cut around the bone of the ham. The slices are generally thin and even, making it really easy to serve to guests.

How do you make honey baked ham?

There are 3 steps to remaking a honey baked ham.

How long does it take to bake a fully cooked ham?

Many hams come fully cooked, which means all you have to do is heat the ham through. The amount of time it takes to heat them ham will depend on how large the ham is, but in general, it will take about 10-15 minutes per pound to heat the spiral sliced ham to 140 degrees Fahrenheit.

It’s important to pour a cup or two of water in the bottom of the baking pan and then cover the ham with foil while it is reheating. This keeps the ham from drying out. Don’t forget to drizzle the honey over the ham while it is baking for a little extra flavor!

You can also heat the ham through in the slow cooker, which is the method we prefer. We’ll explain that below.

Cook Ham in the Slow Cooker

Our favorite way to heat ham is in the slow cooker. It frees up the oven and helps to keep that ham moist and juicy.

The main ingredient in sugar topping for ham is…well…sugar! You can do any ratio of white sugar to brown sugar that you’d like, but we prefer a little more brown sugar. That molasses flavor in brown sugar is unbeatable.

To the sugar you’ll add a touch of different spices such as cinnamon, nutmeg, cloves, paprika, ginger and onion powder. You won’t need much of these spices at all. Just a touch will give you the flavor you’re looking for.

Pat the sugar mixture all over the outside of the ham. You can separate the slice slightly and allow some of the sugar to fall down between the slices.

How to Glaze Ham with Sugar

There are two ways to glaze the ham and get that crunchy sugar on your baked ham.

I can’t stress enough how important it is to keep close watch on the ham while it is under the broiler. Don’t leave it. Check it often. Take it out of the oven once the sugar is bubbly and caramelized.

It’s also important to know that the sugar topping is going to be VERY HOT when it comes out of the oven. Don’t be tempted to touch it or you’ll burn your finger. It won’t take long to cool down, so just be patient.

Should honey baked ham be served at room temperature?

If you buy a honey baked ham, you’ll find that they recommend serving the ham cold. I find it is really a matter of preference. With a ham dinner of mashed potatoes and green beans, we prefer our ham warm. But for leftovers? It’s perfectly delicious cold.

You can serve the ham whichever way you’d like!

What are the best side dishes for a ham dinner?

How long is leftover ham good in the fridge?

Store ham in an airtight container in the refrigerator for 3-5 days. It’s great for sandwiches, casseroles, omelettes and just for snacking.

Can I freeze leftover ham?

Yes! We freeze both the ham bone (perfect for ham bone soup or 15 bean soup) and also freeze the ham. Make sure it is packaged well in a freezer bag. We often double bag it.

It’s best to use the ham within 2 months of freezing.

If you have a lot of leftover ham and are looking for ways to use it up, try one of these favorite recipes: 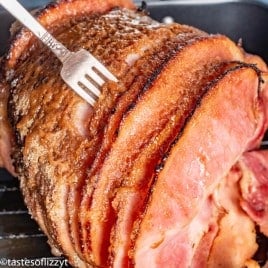 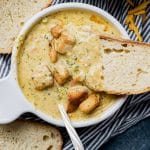 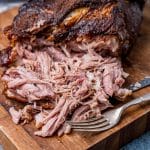 How to Cook a Boston Butt 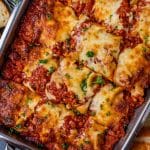 Confused. You say you prefer to use more brown sugar than white sugar for the glaze, yet in your Ingredients List the brown sugar is only 1/3 of the amount of white sugar you say to use. So, what is the ratio of brown vs. white sugar do you use when you make this ham for YOUR family?
–Antoinette

My ham is not sliced should I slice it the best I can before cooking? Seems like that would be easier than after I cook it. This is the first time I have ever cooked a ham so If you know a pork Prayer please say it lol

Which cloves are preferred, whole or ground, or can you use both?

Just watched the video and you said you used about a 10 lb ham.

If I did use the oven instead of slow cooker, what temp and for how long please?

If your planning to serve cold, should you broil only or follow the complete recipe and refrigerate after the crock pot and broiler?

There were no leftovers. Definitely a keeper!

“place the unwrapped ham in the slow cooker” UNWRAPPED?? Sorry, I didn’t get past reading the entire recipe because I stopped at unwrapped. Typo? Sorry for the stupid question.

Can I make this a day ahead if Im ok with eating cold/room temp?

and are you using a pre-cooked pre-sliced ham for this?

What if I wanted to make this entirely in the oven (without a slow cooker)?

Is it possible to do the last step of browning the ham with the sugar on high heat like 475°F in the oven instead of broiler?