Home » Potatoes O’Brien
This post may contain affiliate links which won’t change your price but will share some commission.
JUMP TO RECIPE 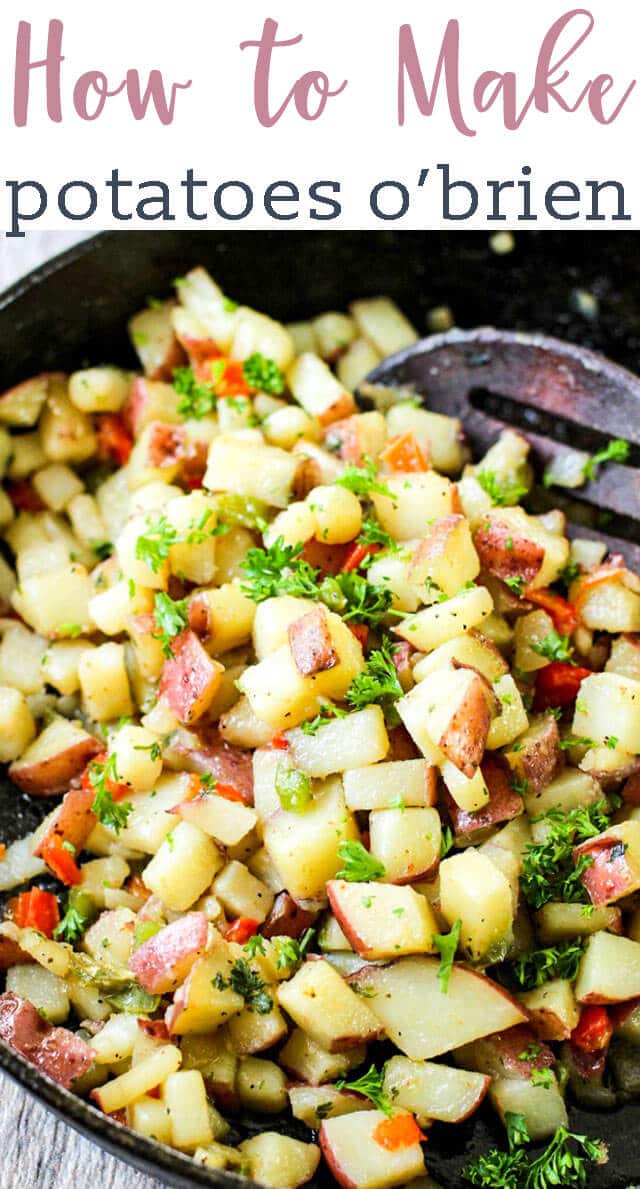 Pan fried Potatoes O’Brien make a great country breakfast. Serve these easy breakfast potatoes alongside sausage or bacon for a comforting start to the day.

So often for dinner we make roasted red potatoes or crispy potatoes in the oven, but when it is breakfast time, we turn to the skillet and allow it to work its magic!

Love potatoes? Read all about potatoes and find our best potato recipes here. 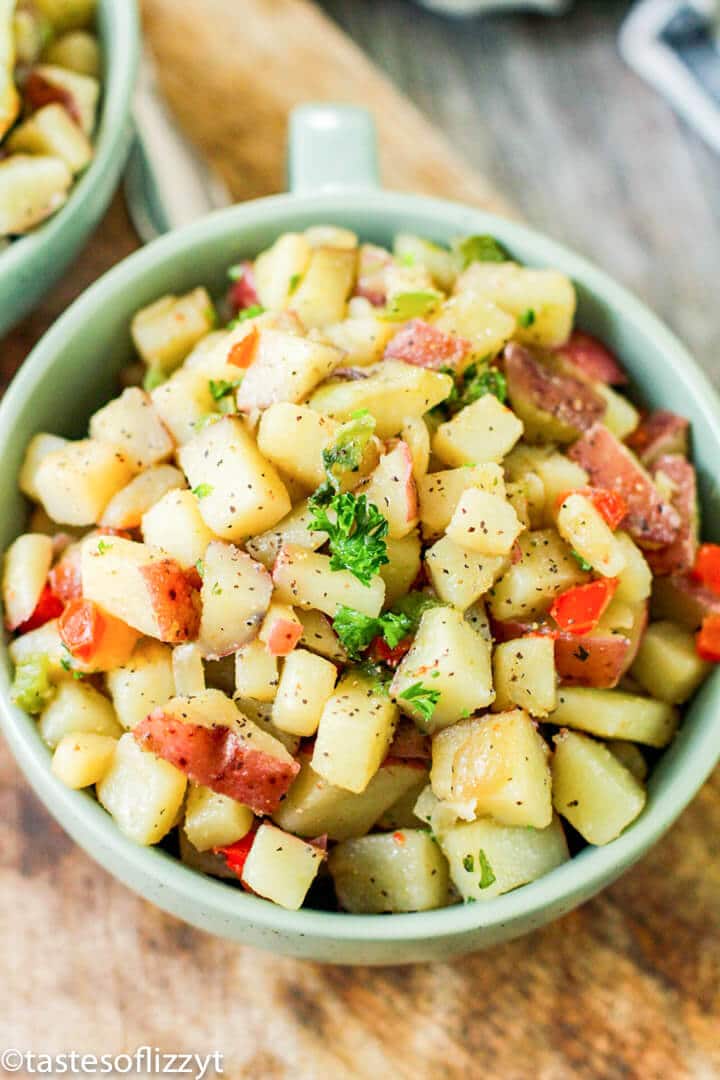 What are Potatoes O’Brien?

Potatoes O’Brien is an old fashioned potatoes recipe that dates back to the early 1900’s. They are pan fried potatoes that also have green and red peppers. They are served hot alongside just about any other breakfast food.

Why is it called Potatoes O’Brien?

So who is the O’Brien behind Potatoes O’Brien? I could not find a clear answer on this! I’ve found that the recipe is attributed to restaurants both in Boston and Manhattan during the early 1900’s, but I couldn’t find a mention to an O’Brien. If you know the answer I’d love for you to share with us. 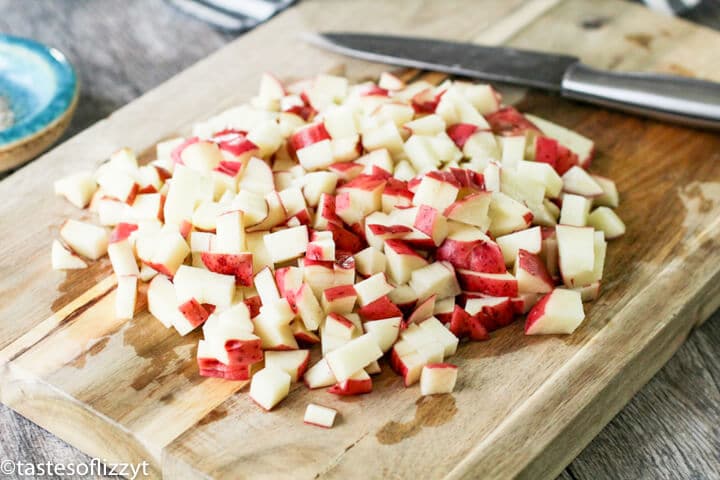 What potatoes are best for Potatoes O’Brien?

Red potatoes are a great choice for these potatoes and other pan-fried potato recipes. They are a waxier potato that hold their shape well when fried. You can use russets if you’d like, but they’ll fall apart during cooking causing the potatoes to have more of a “slightly mashed” consistency.

Read about the best potatoes for your recipe in this article.

Can I use frozen potatoes for Potatoes O’Brien?

Yes! If you don’t want to take the time to chop potatoes, buy frozen cubed potatoes. There’s no need to defrost the potatoes. Just heat the oil and butter in the skillet and add the frozen cubes. 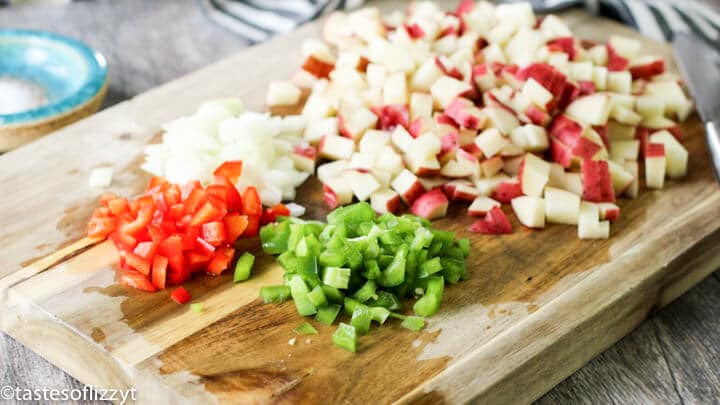 What vegetables go in potatoes?

Traditionally, red and green peppers are cooked with the potatoes in Potatoes O’Brien. We also like to add a touch of onion.

How to Make Potatoes O’Brien

Here’s how we make the best potatoes o’brien:

How Long to Cook Potatoes

The exact amount of time it will take the potatoes to cook will depend on how big you’ve chopped the potatoes. We cut ours in around 1/2″ cubes…no larger. This allows them to cook rather quickly.

Covering the pot also helps the potatoes to cook more quickly than if you leave the pan uncovered.

What to Serve with Potatoes at Breakfast

If you’re thinking of having fried potatoes o’brien for your next breakfast, here are some ideas to pair with it: 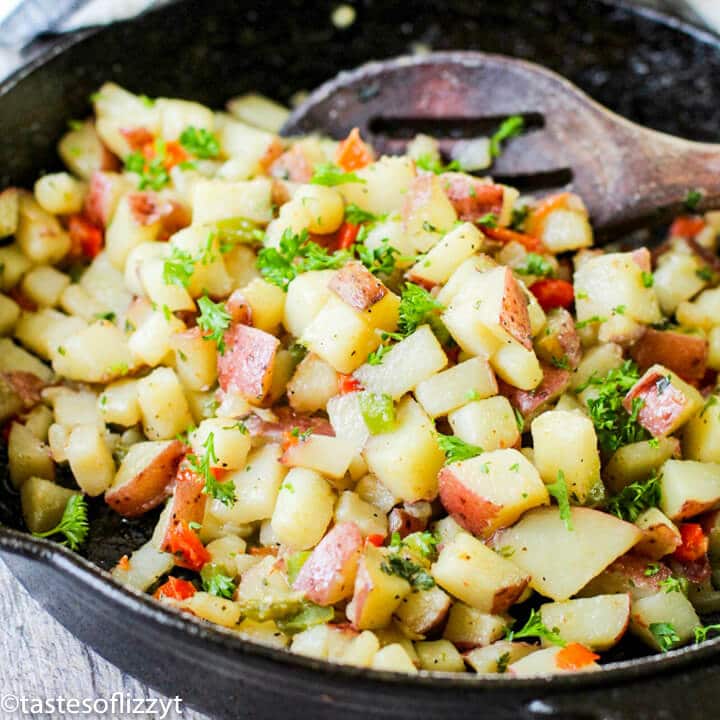