Home » Pumpkin French Toast Casserole
This post may contain affiliate links which won’t change your price but will share some commission.
JUMP TO RECIPE PRINT RECIPE 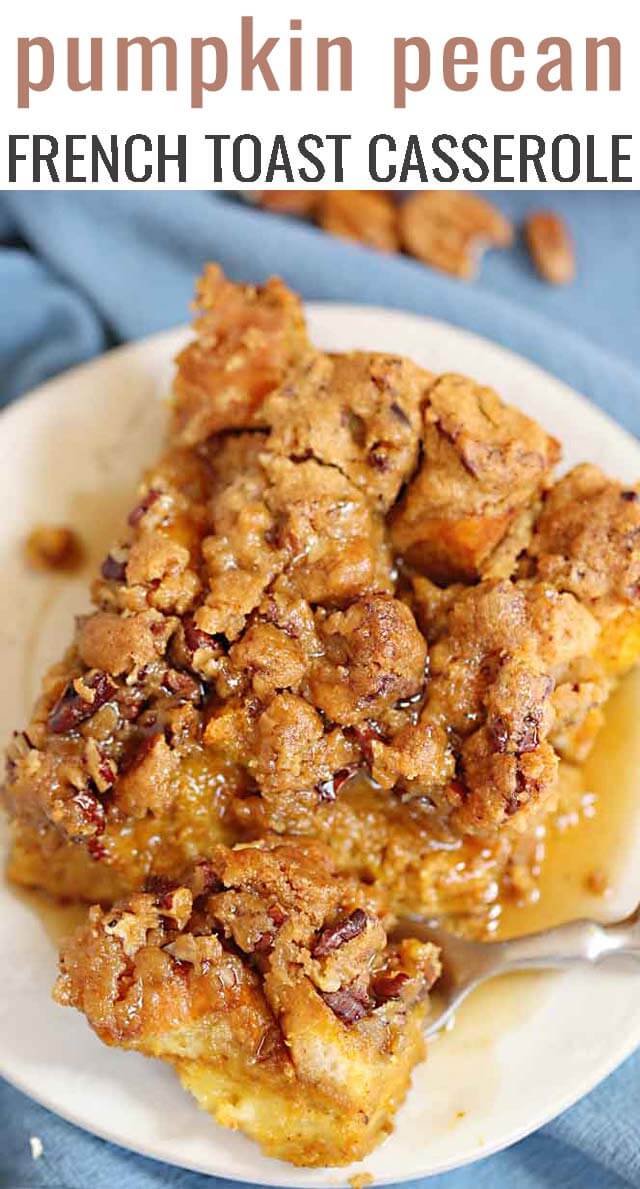 Pumpkin french toast casserole is a great breakfast recipe in the fall! Soft cubed baguette tossed with pumpkin puree, spices, and topped with a sweet and crunchy streusel topping, what more can you ask for?

I always make sure I buy extra loaves of bread before they come over. The beauty of french toast casserole recipes is that the bread you choose can be French, Italian, sour dough, whole wheat, or rye! Each one gives just a little bit of a different flavor.

Whatever kind of bread you have on hand usually works. (Cinnamon swirl bread is also amazing for this pumpkin french toast bake!)

If you have kids over that want to join in on the fun, make homemade bread the night before!

Here are some easy homemade bread recipes to make at home:

In fact, we have a full list of the best homemade bread recipes.

How To Make French Toast Casserole

Always start by preheating the oven! Set it to 350 degrees Fahrenheit.

For this pumpkin french toast casserole we’re going to begin by cutting the bread into cubes.

Some people cut their bread for french toast casseroles by cutting them into thin slices instead of cubes. I find cubes are great for easy eating and serving kids. But you can cut them in slices if you’d like.

**Pro Tip: Buy day old bread at the store. It’s cheap and will soak up that pumpkin mixture really well.**

Put your chopped bread into a well-greased casserole pan. It’s okay if it seems to be a bit stuffed, the milk mixture will weigh down the bread a bit.

Now we’re going to take the remaining pumpkin french toast casserole ingredients and whisk them in a bowl until it is combined and smooth.

Pour the pumpkin mixture over the bread. If you like add in’s now is the time to sprinkle some in!

Set the casserole on the side to make the pecan streusel topping.

What is streusel topping?

Crumbly and buttery, streusel topping is a sweet topping that is used over baked goods such as muffins, cakes, breads, and french toast casseroles.

How To Make Streusel Topping

To make a streusel topping, you’re going to take cool, but room temperature butter (not melted), add it to a bowl with flour and sugar, and cut the butter with either a pastry cutter or your “snap” the butter with your fingers to mix it in.

When making a streusel topping, the key is to NOT OVER MIX the butter and flour. You want a course pebble like streusel that is somewhat still dry, not a wet sand mix.

Toss in the chopped pecans into the mix and sprinkle the streusel topping over the pumpkin french toast casserole. Try to cover as much of the breakfast casserole as much as you can!

The streusel will look light at first, and as it bakes it will become a beautiful golden color that will crispy nicely!

Take a large sheet of aluminum foil and spray one side well with cooking spray. This helps to prevent any topping from sticking to the foil. Lay the greased side over the french toast casserole. Fold the foil over the edges to seal.

Bake the french toast casserole covered for 25 minutes and then uncovered for 20 minutes.

Once the pumpkin french toast bake is done, serve with some pure maple syrup!

Can I freeze french toast casserole?

French toast casserole is best when made fresh, but can absolutely be made into a freezer meal!

What To Serve With French Toast Casserole

Known for being filling, french toast casseroles are best served with light foods!

Here are some simple ideas on what to serve with french toast casseroles:

More breakfast recipes to make for a crowd: 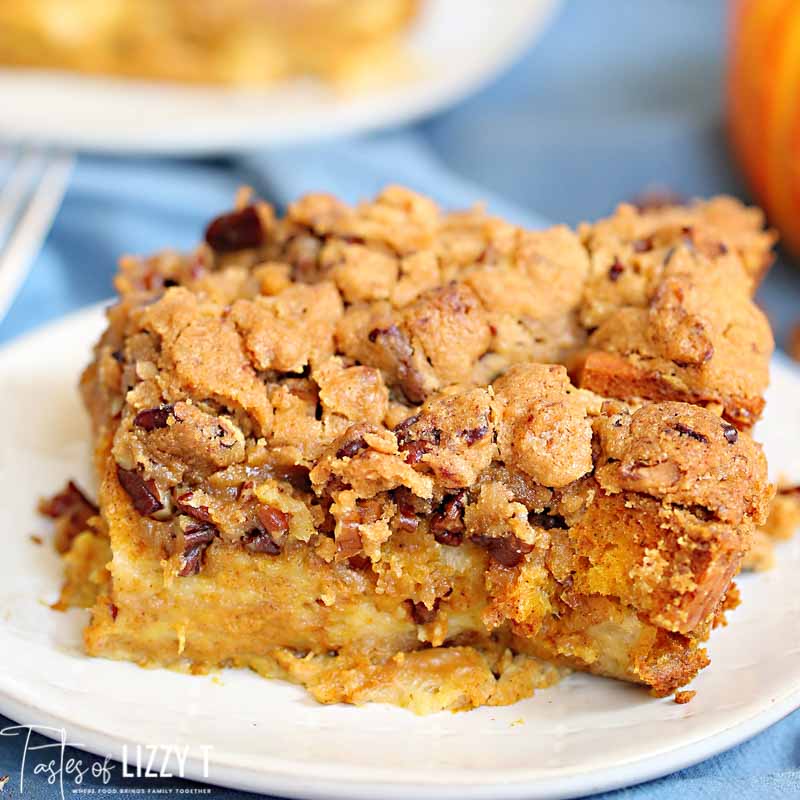 Our family loved this! I like that it takes the whole can of pumpkin. I wouldn’t change a thing. Delicious!