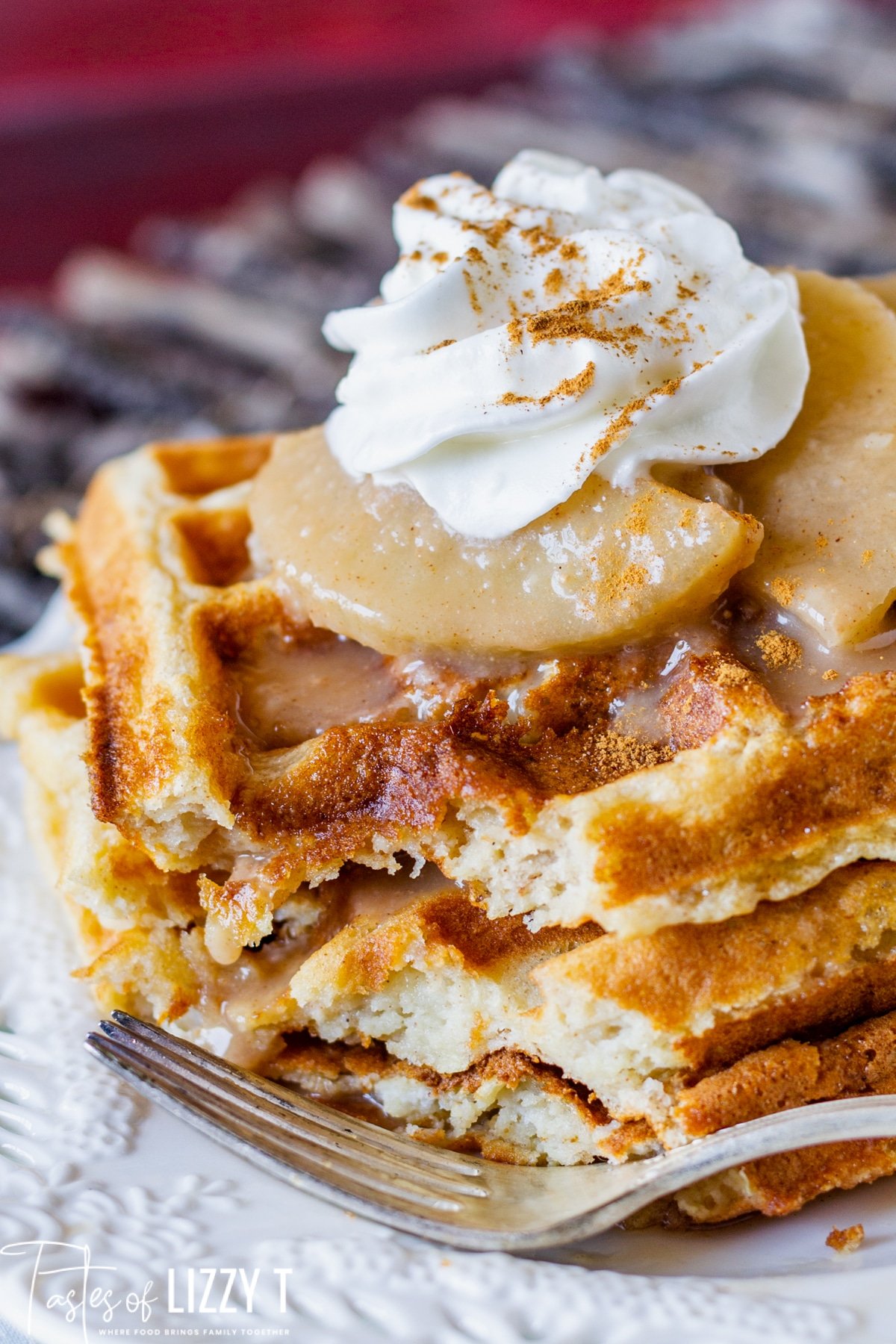 These apple waffles are one of the best apple recipes to make for a delicious fall treat. Top them with homemade cinnamon apple syrup for a breakfast that tastes just like apple pie.

My kids have been trying to cram in the time with friends in the little amount of summer that we have left. Two weekends ago Maddie and Braden were away for the weekend, so Kinslee had her BFF spend the weekend with her.

When we have guests for breakfast, I love having them wake up to a delicious, hearty breakfast. Since Kinslee loves apple pie, I knew these apple waffles had to happen for her.

With new recipes, I’m never quite sure what to expect, but these apple waffles are so delicious. Light and fluffy, with apples in each and every bite.

Why you’ll love these Apple Waffles:

What apples are best for waffles?

Really any apple will work for this recipe. I recommend either Granny Smith, which is very tart and pairs well with the sweet waffle batter, or Honeycrisp or Gala which is slightly sweeter.

Whichever apples you choose, peel and core them, then grate them with a grater so that they cook well in the waffles.

How do you make waffles fluffy?

There are two waffle making tips I’m going to share with you today.

As I’ve mentioned before, cake flour and pastry flour have less protein content in them. Why is this good?

Flours with less protein in them create less gluten when you mix the batter. Gluten is good if you want to make thick, hearty, chewy homemade bread, but it’s not the way to go for light and fluffy waffles.

This is why many recipes for breads and muffins say to “mix just until combined”. That is important for a light-textured bread. Using pastry or cake flour just helps keep your waffles melt-in-your-mouth soft.

I used cake flour this time since I was out of pastry flour, but you can use either. If all you have is all-purpose flour, go ahead and use it, but it will change the texture just a tad. They’ll still be good, though. I promise!

Beat the egg yolks in when you add the milk, then use a mixer to beat the egg whites by themselves until they form stiff peaks. They should be white, light and airy when you fold them carefully into your waffle batter.

Try those two hints on whatever your favorite waffle recipe happens to be.

To top off these apple waffles, I made a simple spiced apple syrup. Although the waffles are fantastic simply with maple syrup, this apple cinnamon syrup gave this fun breakfast a special touch. Think apple pie for breakfast. It doesn’t get much better than that.

The calories shown are based on the recipe making 8 waffles with 1 serving being 1 waffle with apple topping. Since different brands of ingredients have different nutritional information, the calories shown are just an estimate. **We are not dietitians and recommend you seek a nutritionist for exact nutritional information. The information in the nutrition box are calculated through a program and there is room for error. If you need an accurate count, I recommend running the ingredients through your favorite nutrition calculator.**

During apple season, you might find you want a new apple recipe to enjoy. Here’s a few we love!

These waffles look so delicious! What a fun breakfast to wake up to on a sleepover weekend! Fun times.

Love these waffles, and especially that apple syrup! We think we might make a big batch of that to top oatmeal, ice cream, and more. Thanks for sharing.

These sound awesome! Totally perfect for the beginning of Fall!

I love the waffles

Delicious, a little time consuming but worth it. I didn’t make the apple syrup but they were delicious with just good old maple syrup. I used vanilla sugar in place of just sugar and I mixed up extra cinnamon and sugar and tossed the apples in it and let them sit while I mixed the batter. We will definitely make these again.

Can I use all-purpose flour?