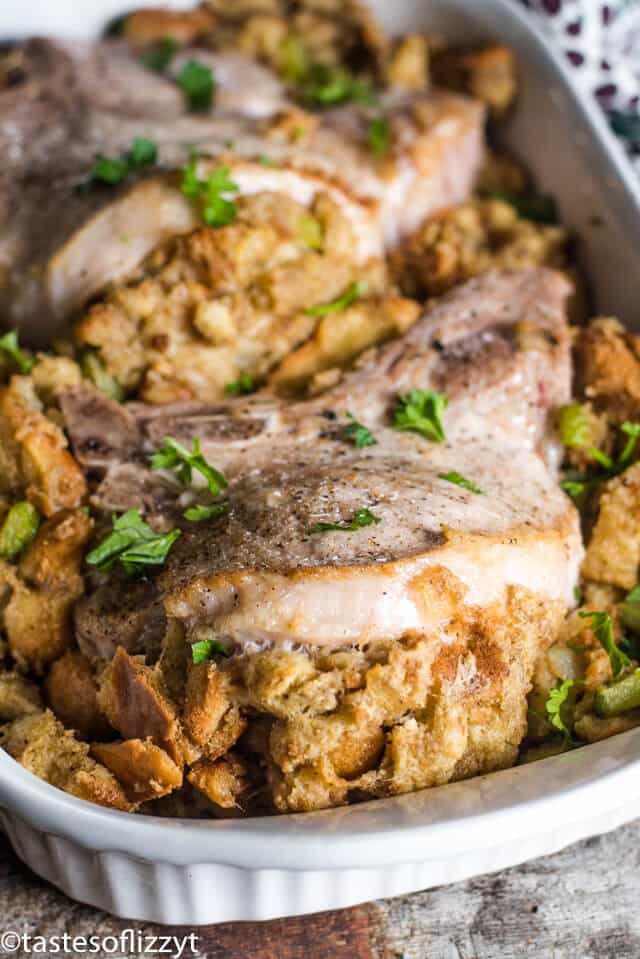 Thanks to the Ohio Pork Council for sponsoring this post and allowing us to share this Honey Oregano Pork Chops Recipe.

Bone In vs Boneless Pork Chops

When I was first testing this recipe, I went to our local butcher to purchase thick cut pork chops. I had in my mind boneless pork chops because that is normally what I buy. She started pulling out the bone-in chops when I told her I was making stuffed chops. She said you could use either, so I decided to purchase both bone-in and boneless thick cut chops. And guess what? I preferred the bone in chops better. They seemed to be juicier and have more flavor.

I recommend bone-in pork chops that are about 1 1/2″ thick. The butcher can cut a pocket in them for you so that is one less step you have to do at home. Your local butcher will love serving you. Don’t be afraid of that meat counter!

How do you cook stuffed pork chops?

There are 4 basic steps to preparing the pork chops.

Some tips to remember: 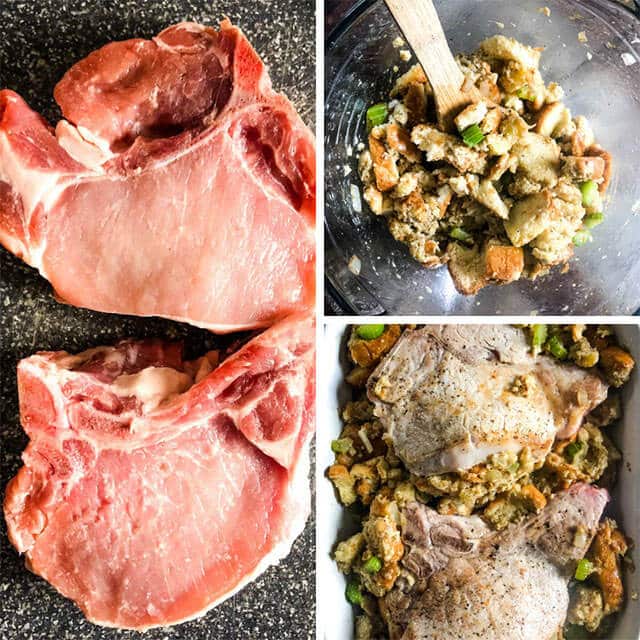 Do you cover stuffed pork chops when baking?

The exact timing will depend on how thick the pork chops are and how much you browned them in the skillet beforehand. We’ve found that between 20-25 minutes in a 350 degree oven is sufficient. 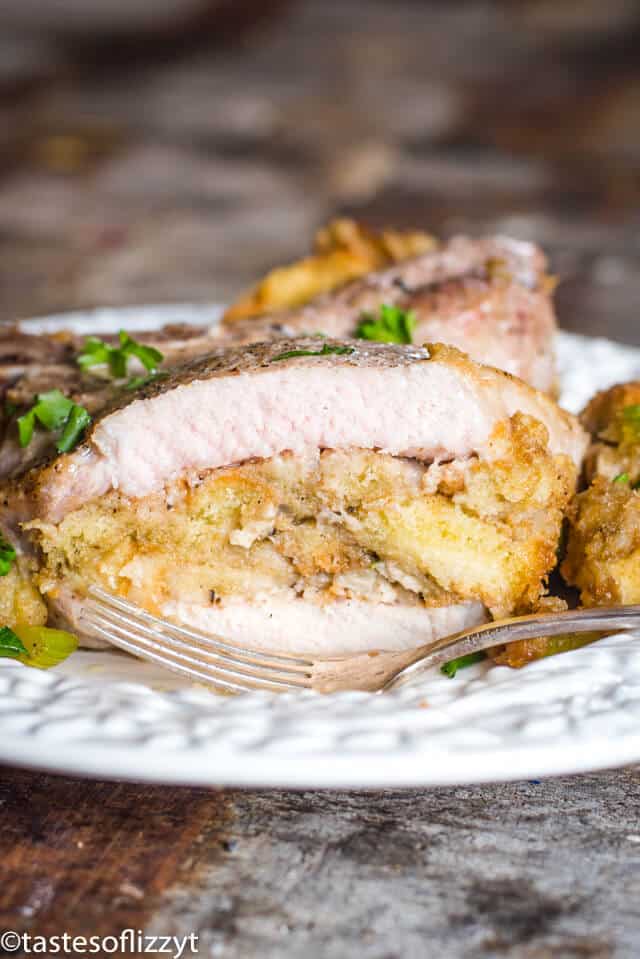 What temperature should pork be baked to?

The key thing to remember when cooking pork chops is to not overbake them. Pork is safe to eat when the internal temperature reaches 145 degrees Fahrenheit. Use a meat thermometer in the pork (not the stuffing) and cook until the temperature reads done. 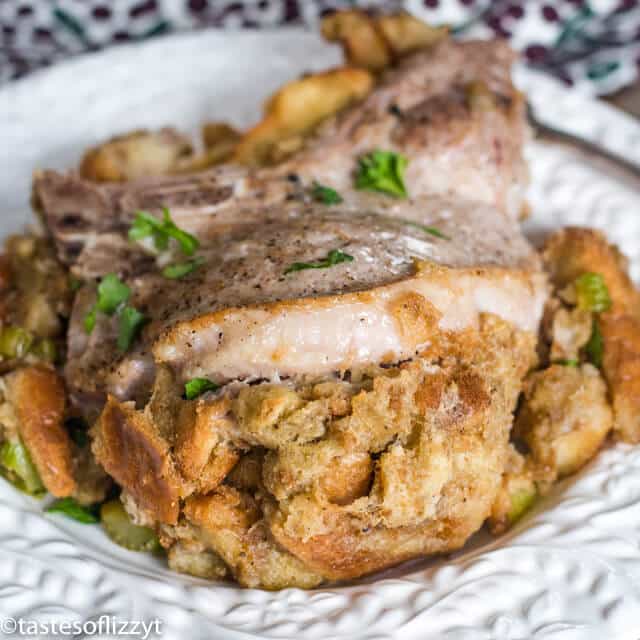 What are good side dishes for pork chops?

This recipe has both a meat and a side dish built into each other, so a simple side salad or veggie is all we add. This would be excellent with our Christmas green beans, slow cooker cream corn, or sweet potato casserole. 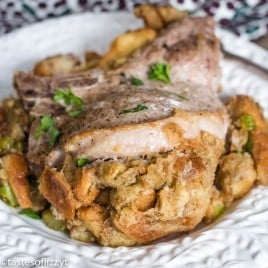 For the pork chops:

*I like to make my own dry bread cubes. Two days before preparing the stuffing, I cut bread into 1" cubes, then allow them to dry in a big bowl for about 48 hours. Stir the bread cubes once or twice a day so they dry out evenly. They should be very dry so they soak up the liquid in the recipe.
Author Julie Clark
Course Main Dish
Cuisine American
Keyword bone in pork chops, easy stuffed pork chops, how to stuff pork chops, pork chop recipes
Have you tried this recipe?
Share a review below or share on Instagram with the tag #tastesoflizzyt. 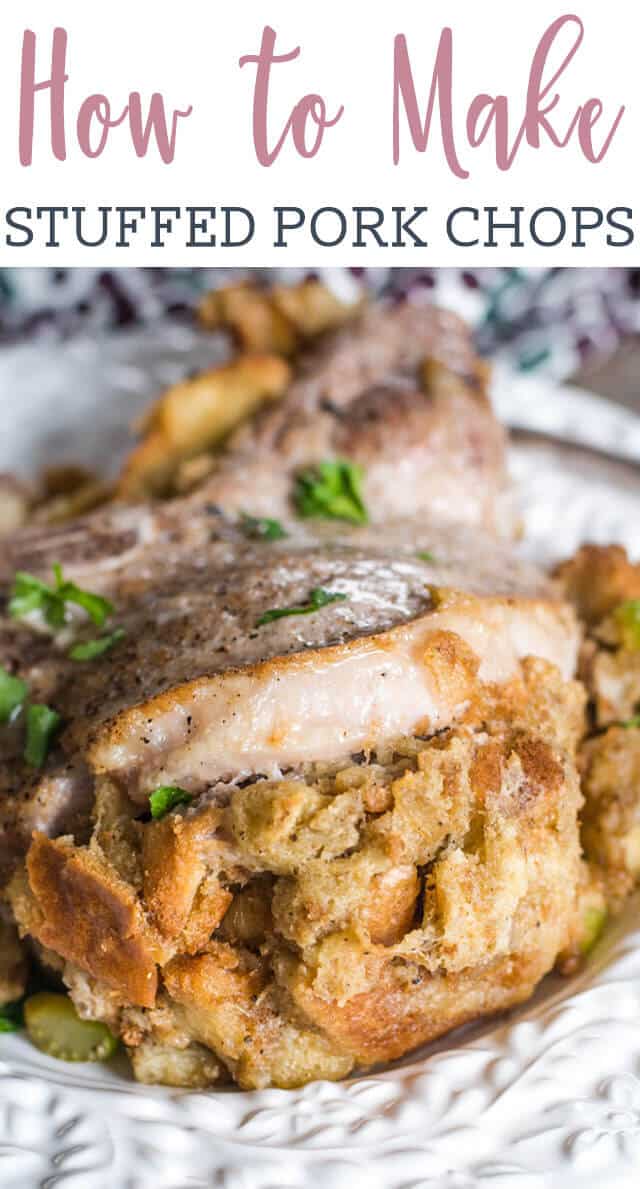 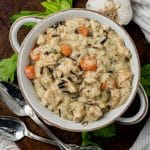 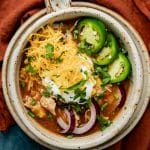 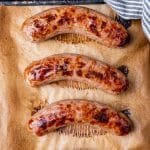 How to Cook Bratwurst in the Oven 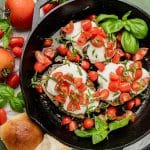 Where does the chicken stock come.in? It’s in the ingredients but not the procedure